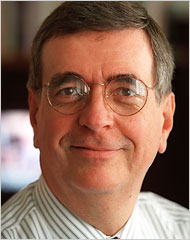 Clark Hoyt is the Public Editor for The New York Times. One reader said Hoyt should have counted articles starting after Labor Day --not the whole year--to properly measure biased coverage. The reader's stats indicated the Times was tougher on McCain than Obama during this period.

Even regular readers will turn to quanitative methods in an attempt to test and communicate their observations and thoughts to the media. Is a media outlet biased? Counting articles can pin down, in meausrable terms, that nagging sense a newspaper is biased.  In a letter to the public editor (See, ” Letters: ‘ Bias, Issues and Scorekeeping,’ ”), New Yorker Times reader, Glen Skovholt wrote, “Your rationale that the number of enterprise or investigative articles in The Times has been balanced is hard to swallow.

” ‘ You say that “The Times has published more tough articles on Obama, 20, than on McCain, 13, since the beginning of last year.’ As though a reader remembers everything written last year? The comparison should be post-Labor Day articles, and they are quite imbalanced in Mr. Obama’s favor.”