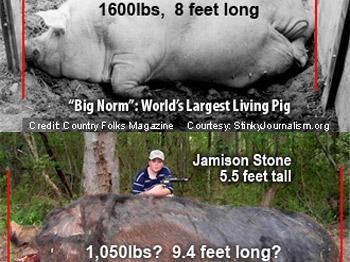 iMediaEthics set off a whirlwind of debunking with its investigation of suspicious photographs and lazy reporting regarding the so-called monster pig of Alabama. Now Rhonda Roland Shearer talks with Kerry Dart, New York farmer and owner of the world’s largest pig, Big Norm. Excerpt from their conversation are below.

SHEARER: Had you heard about this case? Have people been calling you?

DART: No, nobody’s been calling me, but lots of people that know me and know that I own Big Norm said something about it.