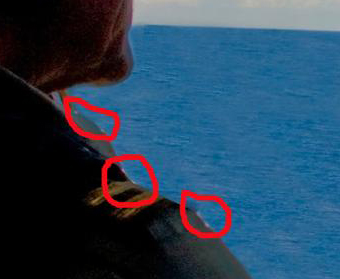 Gizmodo pointed out one of the tip-offs in the third and most recent Photoshopped image posted by BP. (Credit: Gizmodo)

Bloggers on Americablog and Gizmodo have discovered that at least three recently released photos from BP were photoshopped.

The Washington Post wrote July 21 that the Gawker-owned Gizmodo blog had been tipped off that a photo taken from a helicopter was altered.  White space around a pilot in the picture indicated the photo had been doctored.

Gizmodo wrote July 21 “Obviously there are bigger fish to fry when it comes to BP. But every time they fabricate an image like this, it undermines whatever little credibility they have left, along with all of the actual documentation of the massive undertaking this has been and will continue to be.”

Several areas of the photo raised red flags and indicated that the photo had been altered: The air traffic control tower in the top left corner of the photo, the water being different shades of blue, and the white space around the pilot.

The Herald-Sun marked the helicopter image to show red flags on July 23.

Gizmodo wrote July 22 that BP publicly admitted Photoshopping the photo. BP said it issued “new guidelines to staff to ‘refrain from doing (sic) cutting-and-pasting” after the Photoshop revelations and that the company “vowed to stop,” The Telegraph wrote July 22.

On Flickr, BP has an album of altered images with this explanation:

“Typical purposes include color correction, reducing glare and cropping. In a few cases, cut-and-paste was also used in the photo-editing process. These cut-and-pasted images have been removed. The original and edited images have been posted here for comparison. We have also included an image that appears cut-and-pasted, but was edited using the color saturation tool to improve the visibility of a projection screen image.”

There are three sets of photos – the originals and their edits – in the album.

As AOL News reported July 22, BP said the editing was done by the photographer and postproduction team.

Americablog posted July 20 an analysis of the errors in the command center photo, the first BP photo bloggers identified as altered.

PC World wrote July 21 that BP had replaced the photoshopped image of its control room with the original, unedited photo.

“It was a pretty bad Photoshop job – especially for a company that should be playing it very safe with its public image,” PC World wrote.

The second altered photo was off the “top kill” effort, and “inserted a fake screen behind its employees to make them look busier, or something,” the America Blog wrote July 20.  The Washington Post wrote that the image on the screen looked white in the original photo, but that BP’s spokesperson Scott Dean said the photo was edited to make the image “clearer.”

The Washington Post wrote July 21 “While the changes were minor, the embarrassment was major, coming at a time when the oil giant is trying to convince the American public that it is being open and transparent about the oil spill.”

UPDATE: 07/23/2010 9:45 AM EST:  CNN reports that Scott Dean, a BP spokesperson, said the photographer had added in the screens to the Houston control center image because “he was simply showing colleagues how easy it would be to fill in the screens, and he inadvertently left it in that condition.” Dean said that BP is OK with minor photo edits like cropping but not cutting and pasting.