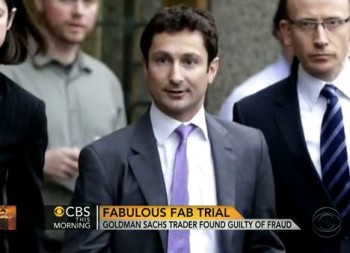 John Pickering was fired as an editor for Bloomberg News after he got the verdict wrong in a headline for a story about Fabrice Tourre, the New York Post reported.

Tourre is a former trader for Goldman Sachs. He was found “liable on six of seven claims that he violated federal securities law by intentionally misleading investors,” the Wall Street Journal reported. “The jurors also determined he had aided and abetted an alleged fraud by Goldman.”  (More on the charges against Tourre and the trial over at Time.)

The headline also apparently made it to Bloomberg’s TV broadcast, evidenced by a screenshot of the error on Bloomberg posted by Huffington Post.

The New York Post’s anonymous sources said Pickering was fired within a day of the error but Bloomberg wouldn’t comment on the firing.

The Huffington Post suggested the error was made because Bloomberg News prepared reports for either scenario of Tourre being found guilty or not guilty and hit “publish” on the wrong scenario.  Back in 2011, the Daily Mail made a similar high-profile error when it hit “publish” on the wrong version of a verdict report. The Mail posted a story saying that Amanda Knox was found guilty in her appeal of her murder conviction in the death of her roommate Meredith Kercher.

iMediaEthics has reached out to Bloomberg News seeking confirmation of Pickering’s firing, a response to the New York Post‘s claims and for more information about the Tourre error and where it was distributed. We’ll update with any response.