Breastfeeding NOT cause for cancer, UK newspaper's Graphic Fail

Breastfeeding NOT cause for cancer, UK newspaper’s graphic fail 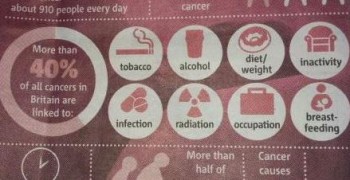 A detail of the incorrect Metro graphic.

The UK Metro reported earlier this year that breastfeeding is a cause of cancer.

But it wasn’t true.

Two people complained to the Press Complaints Commission, flagging the accuracy of the Metro‘s claim.

The Metro made the error in an April graphic about cancer. Information in the graphic was sourced to Cancer Research UK, a Great Britain charity.

Cancer Research UK explained on its website the statistics cited by the Metro came from one of its research graphics and that the Metro likely misinterpreted the data.

“The graphic lists breastfeeding as one of a number of lifestyle risk factors ‘linked to cancer,'” Cancer Research UK blogged. “This is somewhat unfortunate – what the graphic should say is ‘not breastfeeding’ – a large amount of evidence suggests that breast cancers are less common among women who breastfeed for more than six months.”

An image of the graphic, published by Cancer Research UK and on the parenting forum The MumsNet, shows that the graphic stated “More than 40% of all cancers in Britain are linked to”  breastfeeding, among eight total causes.

Cancer Research UK took some of the blame, saying that the error “wasn’t entirely the fault of Metro.”

The wrong information used in the graphic “was taken from some slightly ambiguous wording on our website.” The group added that it has clarified the information on its website to prevent future error. Cancer Research UK said it didn’t have any further comment about the Metro error outside of its blogpost.

The Metro published a statement in print correcting the error, according to the Press Complaints Commission’s resolution. It reads:

“A graphic accompanying yesterday’s story about cancer rates suggested that more than 40% of cases were linked to breast feeding and other causes. In fact, breast feeding has been linked to lowering rates of cancer, both in nursing mothers and nursing babies. Further information is available at http://www.cancerresearchuk.org/cancer-help/about-cancer/cancer-questions/how-is-breast-feeding-related-to-breast-cancer”

iMediaEthics has written to the PCC and The Metro for more information.

Breastfeeding NOT cause for cancer, UK newspaper’s graphic fail