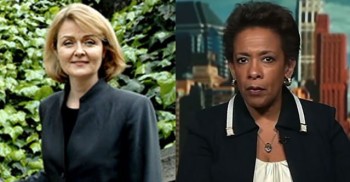 Both of the above women are named Loretta Lynch. The one on the left is an attorney in California and defended the Clintons during Whitewater. The one on the right is nominated for attorney general. (Credit: Media Matters, screenshot)

Breitbert, a conservative news site founded by the late Andrew Breitbart, mixed up Loretta Lynch, who was nominated by President Obama for Attorney General and is African American, with another attorney named Loretta Lynch, who represented the Clintons during Whitewater and is white.

In a Nov. 8 story,  Breitbart reported:

“New York federal prosecutor Loretta Lynch, the nominee for attorney general, has a career filled with high profile cases — and she was a member of Bill Clinton’s defense team during the 1992 Whitewater corruption probe.”

The author of the article, Warner Todd Huston, tweeted:

Little Green Footballs debunked the story Nov. 9, pointing to the San Diego Union-Tribune‘s 2004 profile of Loretta Lynch — the one who defended the Clintons. That Loretta Lynch is a California attorney.

The Loretta Lynch nominated for attorney general was a federal prosecutor at the time of Whitewater, progressive media watchdog Media Matters reported.

The Breitbart story by Huston, now carries a correction at the bottom of the article admitting that Breitbart conflated the two Loretta Lynches. Oddly, Breitbart didn’t correct the online version of the article, which the correction indicates was completely wrong.

The correction reads: “Correction: The Loretta Lynch identified earlier as the Whitewater attorney was, in fact, a different attorney.”

Oddly, Breitbart didn’t change any of the text in the original post to correct it. Instead, the original article apparently remains with the correction at the end. Talking Points Memo editor Josh Marshall argued “it would be challenging to amend the piece in light of the categorical collapse of the article’s central assertion. I mean, how do you correct it? I guess you just don’t?”

Breitbart repeated the claims in a separate article about Lynch, the nominee. In an update, Breitbart’s senior editor-at-large Joel B. Pollak pointed to the Breitbart article linking Lynch the nominee to the Clintons. In a second update, Pollak takes the claims back, writing:  “The Loretta Lynch identified earlier as the Whitewater attorney was, in fact, a different attorney.”