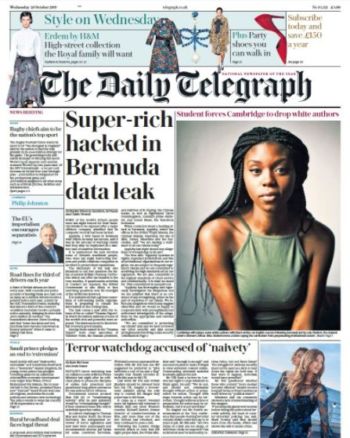 Maybe the reporters and editors at The Daily Telegraph should go back to school because they just flunked interpretive reading. To wit: After a black student at Cambridge University signed an open letter calling for more diversity in the English Department, the newspaper reported that the school was being “forced to replace white authors with black writers.”

The Telegraph‘s Oct. 24 story was headlined, “Cambridge to ‘decolonise’ English literature” and was carried on the front page with a large photograph of one of the students who signed the letter, Lola Olufemi. The photograph carried the separate headline: “Student forces Cambridge to drop white authors.” Oufemi signed an open letter to the university that highlighted that Cambridge University doesn’t have enough diversity in its English Department, called for more diversity in the curriculum and from speakers, and suggested more emphasis on “postcolonial” work.

After the error and front-page photo, Oufemi told the BBC she received “racist and sexist abuse” online. “I think it is very telling that they chose to place a photograph of me, a student, a highly visible young, black woman student on the front of their newspaper, as if to incite this kind of abuse, and incite hatred, and to make me into the figure that people could attack,” she said, according to the Huff Post. Olufemi told iMediaEthics she didn’t have time to respond to our inquiry, but pointed to her quotes in other news outlets.

Cambridge University released a statement explaining that the school was not replacing authors and was still in the process of “academic discussions” in response to the letter. The university also noted students had been harassed because of the news reports. One hundred academic staff members signed a letter, which was published in the Times of London, flagging the “distorted coverage” of the letter and supported Olufemi.

“Despite my spending enormous amounts of time with journalist who wrote this piece of garbage, carefully explaining everything,” she wrote. “Please remind me not to talk to rightwing media again, I ignored warning bells. @camillahmturner that’s the last time you get my co-operation. Shameful.”

The day after its story, The Telegraph admitted error in a Correction and Clarification that states:

“An Oct 25 article incorrectly stated that under the proposals by academic staff in response to an open letter from students in ‘decolonising’ its English Faculty, Cambridge University will be forced to replace white authors with black writers. “The proposals were in fact recommendations. Neither they nor the open letter called for the University to replace white authors with black ones and there are no plans to do so.”

iMediaEthics has contacted the Telegraph and its reporter to ask how the error occurred, if Olufemi was contacted before publication, and for a response to Gopal’s criticism.

Small victories, hopefully I can get on with my job now. Tune in to women's hour at 10! pic.twitter.com/lOnIZz7RBT

Statement from University of Cambridge in support of Lola Olufemi @CUSUWO in reaction to today's media coverage. pic.twitter.com/2Q53sjQZNj

Despite my spending enormous amounts of time with journalist who wrote this piece of garbage, carefully explaining everything. Please remind me not to talk to rightwing media again, I ignored warning bells. @camillahmturner that's the last time you get my co-operation. Shameful https://t.co/CW97gPL9qc