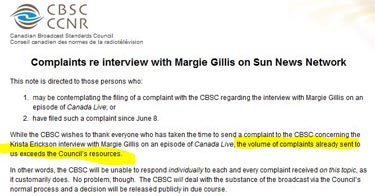 “The volume of complaints already sent to us exceeds the Council’s resources,” a note on the CBSC website reads.  “In other words, the CBSC will be unable to respond individually to each and every complaint received on this topic, as it customarily does.”

The CBSC added that the number of complaints received doesn’t effect the council’s decision.  Instead, “decisions are always and only based on whether a broadcast has breached one of the CBSC’s codified standards.”

The Globe and Mail reported that CBSC has never “published such a notice” before noting that “viewers have sent in more than 4,350 complaints since the interview aired on the Sun News program Canada Live on June 1. The CBSC receives on average 2,000 complaints in total in any given year.”

The Star added that CBSC national chair Ron Cohen noted “it’s the most individual complaints we’ve received about a single incident.” and that it might take “between six and eight months for the council to reach a decision.”

Cohen indicated the complaints may center on the CBSC ethics standard for “full, fair and proper presentation of news, opinion, comment and editorial,” the Globe and Mail reported.  Cohen explained the council will set up a “panel of adjudicators.”

While CBSC, much like the UK Press Complaints Commission, can’t “fine broadcasters,” it can call on Sun TV to “air a statement about the ruling.”

The Star reported “More viewers have complained to the Canadian Broadcast Standards Council than watch Sun TV (recent figures are as low as 4,000).”

StinkyJournalism wrote in early June about the June 1 interview with interpretive dancer Margie Gillis.  While Sun TV reporter Krista Erickson opened the 20-minute interview with praise for Gillis, the tone of the interview turned  more “combative” as Erickson continued to ask why “it’s costing taxpayers $1.2 million” in funding Gillis’ foundation over the past decades.

Erickson often interrupted Gillis and didn’t allow her to answer some of the questions Erickson asked.  Gillis even said “I’m your guest, perhaps you might let me speak” and asked for Erickson to treat her “with a little bit of respect.” (Read our first report on the interview here.)

The interview drew much criticism and outrage from online news outlets like the Globe and Mail, Georgia Straight, and the Coast.  Erickson herself commented on air a week later that she became “the subject of that bullying” with “hundreds” of complaints for the interview.  Gillis re-directed her supporters to complain with the Canadian Broadcast Standards Council.

Michel Raymond, the general manager of Gillis’ dance foundation, told iMediaEthics in a mid-June e-mail that the Sun TV interview “became a personal attack on Margie Gillis and her artform” and criticized Erickson’s “rude, impolite, mocking and belittling” behavior in the interview.  (See more of our report on the Margie Gillis Dance Foundation’s response to the interview here.)

We e-mailed with the foundation’s Michel Raymond this week. Raymond noted that “indeed, the CBSC has received more than twice as many complaints regarding the Sun News interview in the month of June as they do in a year for ALL complaints of all kinds.”

Raymond added that Gillis’ foundation and Sun TV hasn’t had any communication since the June 1  interview.

According to Raymond, Gillis and Erickson were supposed to be interviewed on the nationally syndicated radio program “The Roy Green Show.” While they weren’t to appear “simultaneously,” Raymond told StinkyJournalism that “in light of the coming CBSC investigation, the Sun News journalist withdrew from the project.”   (StinkyJournalism wrote to Roy Green to confirm this. He redirected us to CHQR’s Whitney Deane, who filled in for him.  We wrote to Deane, and will update with any response.)

Gillis’ interview did air on the program July 2, according to Raymond.

Raymond stated that the interview’s “tone” has led to “a wave of outrage in the population” across political parties.

“A large number of people who are not regular consumers of art have come forward to say they approve of the concept of public participation in arts funding. Making sure arts and culture are alive and well in this country is said to be vital to the well-being of our democracy. This is the positive outcome of the interview. It seems the aggressive manner in which the interview was done has backfired.”

Regardless, within a month of the Erickson-Gillis interview, Raymond noted that Canadian finance minister Jim Flaherty “warned arts organizations not to count on their funding as the government might elect to fund ‘new ideas.'”  Flaherty commented that “we actually don’t believe in festivals and cultural institutions assuming that year after year after year they’ll receive government funding.  They ought not assume entitlement to grants.”

“Personally, I find this situation strangely reminiscent of what happened during the Bush years with the help of Fox news,” according to Raymond.

Digital Journal commented that “There’s is nothing wrong with debating that issue. What was disturbing was the overall attacking of an acclaimed dancer is not in charge of the process. Erickson’s style showed an utter disregard of the entire arts community. By being on the attack her views were shown in a negative light that for far too many went too far resulting in a new record for the reporter. She now can say she is one of the most complained about interviewers in Canadian broadcast history.”

iMediaEthics has written to CBSC’s Ron Cohen for further comment and will update with any response.