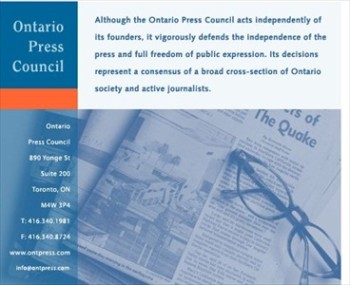 Ontario’s press council ruled that the Toronto Star and the Globe and Mail didn’t break ethics standards in its reporting on the “distress call of a dying police officer as he lay pinned under a minivan,” CBC News reported.

The York Regional Police police officer, Garrett Styles, was “dragged 300 metres before being pinned under a minivan he had stopped” in June and had called a dispatcher.  YorkRegion.com and CityTV.com explained that the minivan driver “attempted to drive away,” dragging Styles and then  flipped when the driver lost control. His last words were made to a dispatcher and included him having “pleaded for someone to get the overturned minivan off him and expressed concern for the occupants.”

According to CBC, “Several media outlets, including The Canadian Press, published or broadcast parts of his distress call over his police radio.’ and the Toronto Star and the Globe and Mail published a total of three articles on the call.   However, according to the CBC, the council’s ruling addressed the print media’s coverage and not the broadcast media.

Complaints over the broadcast coverage will be addressed by the Canadian Broadcast Standards Council, according to the CBC.

The council’s executive director Don McCurdy told York Region Police Chief Eric Jolliffe in a letter that “The council found the coverage served to highlight the courage and concern Const. Styles exhibited when he asked for emergency aid for those in the van as his life slipped away,” CBC reported.

Jolliffe had claimed that the news coverage of the call “compounded the grief” of Styles’ family and fellow police officers, but the council decided the print media coverage were “clearly in the public interest, were accurate and had news value.”

The Globe and Mail’s Sylvia Stead told iMediaEthics by e-mail that it has no comment on the ruling.

iMediaEthics has written to the Canadian Broadcast Standards Council to confirm it is handling complaints on broadcast media’s reporting in this incident and to ask when it expects a ruling. We have also written to the York Regional Police and the Toronto Star to ask for comment on the ruling. We will update with any response.