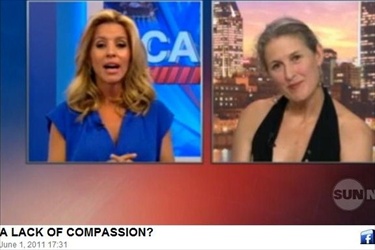 The Canadian TV news station Sun TV and its reporter Krista Erickson have been slammed for Erickson’s June 1 interview of dancer Margie Gillis.

Erickson joined Sun News, which has been nicknamed Fox News North, in June 2010, the Globe and Mail reported.  She previously worked for CBC News for eleven years. Gillis is an interpretive dancer and choreographer who runs a “dance foundation.”

The roughly 20-minute segment can be seen here.  While in introducing Gillis, Erickson was complimentary and praised Gillis’s achievements, Erickson quickly switched to a confrontational style of interview.  After Gillis responded to her question asking how much money she has received in funding for grants by saying she wasn’t sure but it was all disclosed online, Erickson revealed the total amount as $1.2 million since 1998.

Then, Erickson asked why “it’s costing taxpayers $1.2 million a year” to fund Gillis and her foundation.  After being prompted by Gillis, Erickson corrected to say over the last 13 years. Erickson continued to bring up the $1.2 million figure and interrupted Gillis often when Gillis attempted to answer her questions, making it hard at some times to hear what either was saying.

At one point, Gillis commented “I’m your guest, perhaps you might let me speak” and requested Erickson would “treat me with a little bit of respect.”

As Gillis explained some of the ways the $1.2 million has been used over more than a decade, Erickson criticized Gillis for saying in one of her performances that society isn’t compassionate enough.  Gillis commented more than once that Erickson was “belittling” the dance and arts community.

Erickson linked Gillis’s compassionate comment to Canadian soldiers fighting in Afghanistan and asked if “$1.2 million isn’t enough compassion.” Gillis responded “I think it’s very sad you would belittle us and certainly that you would compare us to soldiers who have given their lives.”

While Erickson admitted about half-way through the interview that “we’ve had a combative interview,” she also admitted she doesn’t “get the interpretive dance thing,” called elements of the dance “high falutin” and wanted to know “why taxpayers are paying for that.”  Meanwhile, Gillis countered that “the average income for a dancer is closer to $12,000 a year” to suggestions that Gillis is earning a significant amount of money from the government.

The caption for the segment is also telling: “Canadian ‘interpretive dancer’ Margie Gillis argues that Canadians need to have ‘more compassion’ when it comes to funding artists such as herself.”

Online Canadian magazine Back of the Book published an article by Louis Laberge-Cote in reaction to the interview. Laberge-Cote, a Canadian dancer, choreographer and teacher, described Erickson’s “attacking” interview as having “bullied” Gillis with no “respect and consideration” for Gillis.  Laberge-Cote called on readers and viewers to protest Sun TV by not watching or visiting its website and complain to Parliament, the CRTC and cable providers.

“If by attacking dance artist Margie Gillis on the Canada Live show aired on June 1st, Krista Erickson, anchorwoman for the Sun News Network, intended to publicly insult a well-respected artist on a sensationalist broadcast news channel, she certainly achieved her goal.”

The Globe and Mail described the interview as “comedy of the raw sort” and noted that Erickson “tried to beat [Gillis] up, verbally.”

Independent Nova Scotia newspaper The Coast described Gillis as “gracefully and eloquently” defending the arts and “with a saint-like patience.”

In a follow-up post, Georgia Straight noted Sun News’ Erickson reported June 8 she has received negative feedback about the interview. Erickson said she has “been inundated with hundreds of emails, phone calls, extremely hostile, threatening, calling me four-letter words that I cannot repeat. And they come from around the world.”

She claimed she has “now been the subject of that bullying” in response to the interview.  In that June 8 segment, Sun TV gave an “award” to a viewer who sent in a video of himself mocking Gillis’ dance style.

Since the interview, Gillis has thanked fans for support on her Facebook page and also let her Facebook fans know how to file a complaint over the interview with the Canadian Broadcast Standards Council (CBSC).  In one post, Gillis wrote that she doesn’t support the negative messages to Erickson, though.

iMediaEthics notes that “Canada’s National Broadcaster,” CBC, where Erickson formerly was employed, found in 2008 that Erickson was guilty of “providing questions to a member of parliament.”  In the ombudsman’s report on the incident, Erickson was found to have used “inappropriate tactics” that were “inconsistent with CBC news policies and procedures.”

The ombudsman, Vince Carlin, noted there were 66 complaints against her and that after a “conversation with her,” he learned she wasn’t “fully versed on the CBC’s Journalistic Standards and Practices.”

iMediaEthics has written to Margie Gillis, Sun News, and the CBSC and will update with any response.

Thanks to reader Valerie Alia for passing on the tip!