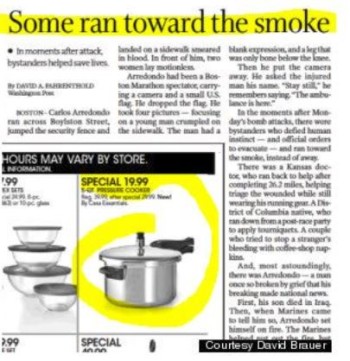 The Cape Cod Times apologized to readers for putting an advertisement for a pressure cooker next to a story about the pressure cooker bomb used in the Boston Marathon explosion, Jim Romenesko reported.

“The news content was related to the Boston Marathon bombing, including a graphic detailing a pressure-cooker bomb, while an advertisement by Macy’s included a pressure cooker as a sale item,” according to the April 18 apology signed by editor Paul Pronovost. The “unintentional” error was “an unfortunate juxtaposition,” Pronovost wrote.

“We apologize for appearing insensitive in light of this terrible event.”

According to Romenesko, the same Macy’s ad also was published by the Minneapolis Star Tribune. That ad also appeared beside an article on the marathon bombing. The Huffington Post has images of the print and digital versions of the ad and the article.

Macy’s ended up apologizing for the bad timing of the ad, which department store officials said was scheduled in advance.  In a statement to the NY Observer, Macy’s explained:

“We sincerely apologize to anyone who was offended by our ad in today’s newspaper, it was truly unintentional. As part of our regularly scheduled promotion for the One Day Sale, an image of a pressure cooker was featured along with approximately 20 additional items for the home. Due to the lead time to place national advertising, we were unable to pull the image and apologize for any insensitivity in light of recent events. All possible efforts are being taken to remove the item from future ads.”

In December, The Cape Cod Times apologized after learning its reporter of 31 years Karen Jeffrey made up sources for at least 34 stories, as we wrote at the time.

Check out iMediaEthics’ latest stories on news coverage of the Boston Marathon bombings.