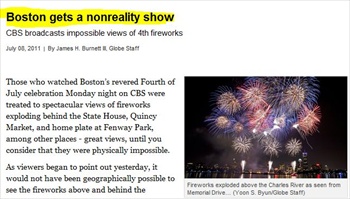 The Boston Globe reported that CBS aired fake footage of fireworks from the Fourth of July. (Credit: Boston.com, screenshot)

CBS altered its on-air footage of the Fourth of July fireworks celebration in Boston, the Boston Globe reported. Images of Boston landmarks were spliced with firework footage.

As the Globe explained, CBS showed images of “fireworks exploding behind the State House, Quincy Market, and home plate at Fenway Park, among other places – great views, until you consider that they were physically impossible.”

The Globe cited media critic Eric Deggans who commented that the phony footage is “an ethical issue” even though the show was technically part of CBS Entertainment.  Deggans stated:

“The most important commandment for media is to not mislead the viewer. . . . If you’re a viewer who doesn’t know Boston, you’re getting a picture of the layout of the city that doesn’t exist.”