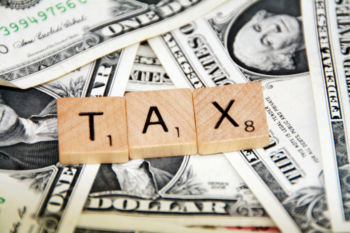 One subject included in the poll was the public’s reaction to the Republican Tax Plan. The initial question on this topic was whether people approved or disapproved of the plan. No prior question asked how much people knew about the issue or how closely they were following it.

The implicit assumption was that everyone knew about it. “From what you have heard or read, do you approve or disapprove of the Republican Tax Plan?”

Note there is no explicit option to say “don’t know” or “unsure.” Respondents who might not have heard or read much about the plan would have had had to volunteer that they were unsure.

This type of “forced-choice” format pressures people to come up with a response, regardless of whether they have an opinion. And it results in many more respondents seeming to have an opinion than a format that provides an “unsure” option.

In this poll, just 12% volunteered no opinion overall. Among Democrats, the comparable figure was 8%, among independents 15%, and among Republicans 12%. 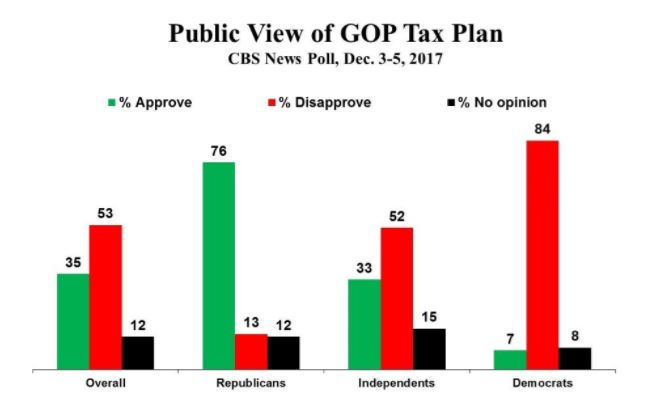 But have most people followed the issue closely enough to have an informed opinion? The next question in the poll suggests they do not.

The question asked: “Do you feel you have a good understanding of what the Republican tax plan would do, or haven’t you heard enough about it yet?”

Given that 88% of respondents had just offered their approval or disapproval, you might think that most respondents would have chosen the first option: that they had a “good understanding” of what the plan would do. But less than half of the sample, just 43%, did so. 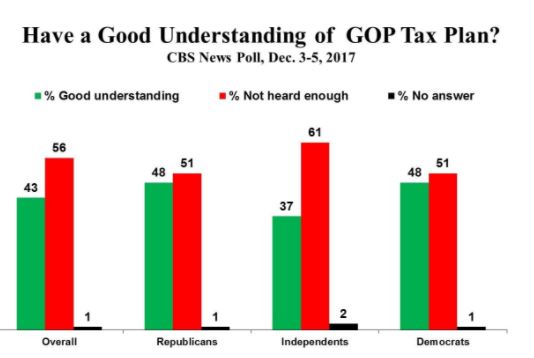 Overall, more than half of the respondents (57%) admitted they did not have a good understanding of what the plan would do, including just over half of all Republicans and Democrats, and more than six in ten independents.

The poll asked what the effect of the Republican Tax Plan would be on each of the following:

As the numbers make clear, by asking “forced-choice” questions, pollsters can get the vast majority of respondents to come up with an answer – despite admitting only moments before that they don’t know much about the issue.

Most pollsters avoid this appearance of polling the ignorant by not asking the knowledge question at all.

For over half the sample of respondents in the CBS poll, the “opinions” they expressed were at best their top-of-mind reactions to the questions. It would be a mistake to take the results literally, given how many people admitted they didn’t really know much about the tax plan.

It is, of course, true that people can have strong opinions without knowing much about an issue. Some people may strongly favor the Republican Tax Plan because it is “Republican”, just as some people will strongly oppose it for the same reason.

The CBS poll did in fact ask an intensity question of the approval/disapproval question, showing 16% who strongly approved of the tax plan and 40% who strongly disapproved. Thus, just over half of the public has strong opinions, despite less than half having a “good understanding” of the issue.

Such an apparent conflict is not unexpected. Some strong partisans don’t need to know much about a policy, except which party supports it, to arrive at strong opinions.

But many people are not that emotionally involved in policy matters or that committed to a partisan view. The CBS poll suggests that more than four in ten Americans, 43%, don’t feel strongly about the tax plan one way or the other.

The illusion of informed public opinion is much more reassuring than reality.