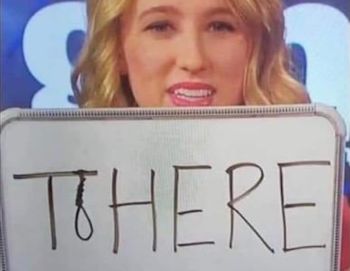 Bailey showed a hand-written white board on air that said “THERE” that featured the noose. See a picture below.

“The brain teaser read ‘THERE’ with a noose hanging between the ‘T’ and the ‘H,’ to represent ‘hang in there,'” the Oklahoma newspaper the Norman Transcript reported. iMediaEthics has written to the station and Bailey.

“From KSWO management: On Monday morning, one of our employees at KSWO-TV displayed an image that was offensive and unacceptable. At KSWO, we do not tolerate behavior of any kind that depicts hatred, social injustice, racism or anti-Semitism. The employee responsible was terminated immediately. On behalf of all of the employees at KSWO, we offer you our sincere, heart-felt apology with a promise that we will continue to work tirelessly to earn your trust every day.”

Ad Week posted an image of the graphic.

On Twitter, Bailey wrote that the firing was “a decision made by management.”