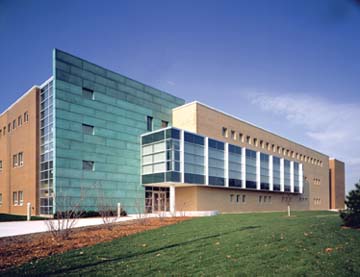 An image of Stevenson High School in Lincolnshire, Ill. (Courtesy of SchoolDesigns.com)

For high school journalists, it doesn’t always take a Supreme Court Justice to silence the press. Adlai E. Stevenson High School in Lincolnshire, Ill., has been in the news over two recent clashes between school administration and reporters at the student paper The Statesman.

First, the school canceled an edition of the paper containing stories about teen pregnancy and drug use in November.  Then, last week, the Chicago Tribune reported, editors again found themselves planning to publish a blank first page, after the school nixed their cover story quoting a student using birth control pills to control her menstrual cycle. With two incidents in rapid succession, the situation at Stevenson High raises some ethical and legal questions about student journalism and the First Amendment.

According to the Tribune, “Concerns about censorship drove dozens of people to the Stevenson High School board meeting in Lincolnshire” Thursday, Dec. 17. The issue at the heart of the clash between students and administrators hinges on two questions: 1) whether the stories themselves were pieces of ethical journalism; and 2) whether the oversight that prevented publication of these stories was ethical.

The Tribune reports that  Stevenson board president Bruce Lubin said at the meeting that “he agreed that Friday’s intended story would have addressed a newsworthy topic but said the administration disagreed with publishing such private information about the student.”

In a transcript of Lubin’s statement at the meeting, the board president says, “Our educators believe, and we agree, that there are only limited instances in which the use of anonymous sources is appropriate in the school setting.” He explains that though anonymous in print, sources are easily tracked down by the school community.

The Society of Professional Journalists’ code of ethics mandates that journalists avoid causing harm to sources, and weigh newsworthiness against personal privacy. Lubin seems to imply that these stories could have been harmful to students. However, it seems, at least from descriptions of the pieces, that such harm may not have been the risk Lubin presents it to be. Sources reportedly spoke to Statesman journalists willingly, both in the case where they spoke anonymously and in the more recent case, where a student was willing to be named and to disclose her own medical information. Is it within the bounds of the school administration to then mandate that these willing students cannot make those disclosures, or The Statesman report them?

According to the Tribune,

Pam Selman, 18, a senior and the Statesman’s editor in chief, told the board that the student journalists felt “bullied and helpless, intimidated and unimportant” in the clash with administrators.

“The worst part about it all is that (the censorship) is not just unlawful — it’s bad teaching and bad journalism,” said Selman, of Buffalo Grove. “The fact that we are students does not deprive us of our rights as journalists working on a limited public forum to be free from unreasonable restraint.”

Selman makes a good point. If the goal of student newspapers is education, then student journalists should be learning to practice ethical journalism the way professional journalists practice it. Even if the administration was trying to uphold one ethical lesson—of preventing harm to a student’s reputation, that doesn’t mean they didn’t botch another. Moreover, if the administration’s aim was to educate the statesman staff on professional journalistic practices, it is arguable that they should have been given the appropriate First Amendment protections. However, only some states in the U.S. grant full First Amendment rights to student journalists. (More info here.) For the rest of the country, rights hinge on recent case law allowing thicker control over student reporters.

The issue determining whether censorship is legally appropriate at Stevenson High hinges on how the paper was treated by the school, and what role it plays.

According to the Tribune, board president Lubin “referred to a U.S. Supreme Court ruling that student newspapers are not a public forum but an educational and curriculum endeavor.” This ruling is Hazelwood School District v. Kuhlmeier. (More info here.) Hazelwood established that a school newspaper doesn’t necessarily enjoy full First Amendment rights. According to the Student Press Law Center, other cases, like Dean v. Utica Community Schools, and Draudt v. Wooster City School District Board of Education have established that “nonpublic forum publications are subject to the Hazelwood standard. Publications classified as public or limited public forums are protected by the much higher Tinker-based standard that requires school officials to show that the material they censor is either unlawful or substantially disruptive to the school.”  The level of freedom student journalists may be granted rests on whether their paper is a “public forum,” a “limited public forum” or not a public forum at all.

Lubin described The Statesman as a “school-sponsored” paper, and says “The Statesman is not a “public forum”, but rather, an educational and curriculum endeavor” in his speech at the meeting (reproduced here). At the same time, students and administrators both seem to agree that the paper has been given freer license in the past. Lubin implies that prior review of stories is an “informal” policy, but it appears that this policy may not have been clear to the editors of the paper, or consistently enforced.

Moreover, the newspaper course description (quoted here) seems to imply a freer policy. “Because this is a student publication, all responsibilities, from the planning of the content to the design of an issue to the processing of photos and the completion of pages, are handled by students,” it reads. This could allow students to argue that the paper is a limited public forum, and deserves greater First Amendment rights.