Charlie Hebdo Cartoon: God ‘Drowned all the Neo-Nazis of Texas’ 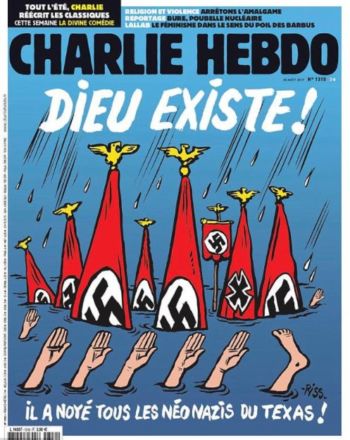 Politico found itself in the middle of controversy last week over its Matt Wuerker cartoon on Hurricane Harvey and its devastating impact on Texas. Now, many are upset over a cartoon on the hurricane that appeared in the French satirical magazine Charlie Hebdo. The magazine’s cartoon suggested, with its iconography, that Texas victims were all Hitler-saluting neo-Nazis. At least 50 people, to date, have died in Texas because of the impact of Harvey.

Charlie Hebdo‘s front page read, in French, “God Exists! He Drowned all the Neo-Nazis of Texas.” It depicted drowning people with their hands apparently giving the Nazi salute and Swastika flags sticking out of flood waters.

News commentator Piers Morgan called the cover “even by their standards, absolutely disgusting.” Below, read some reactions to the cover. iMediaEthics has written to Charlie Hebdo to ask for a response to the criticism of the cartoon.

This Charlie Hebdo cover on the Houston disaster is, even by their standards, absolutely disgusting.https://t.co/iaIReTHlnV pic.twitter.com/BMHpXCqAnS

If you are mad at Charlie Hebdo NOW but thought their racist caricatures of Muslims, Jews, and black people were just fine then idk man idk

Charlie Hebdo staff got slaughtered in a terror attack after making fun of Muslims. @WalshFreedom always manages to be a parody of himself. https://t.co/jNvd4wjFgS

One can defend a person’s free speech rights while expressing revulsion for the content of their speech. https://t.co/GC0ggdsj7t

Leftist French magazine Charlie Hebdo calls Hurricane victims Nazis. ALL people of ALL races have been affected. Shows how dumb the left is.

I would kindly remind Charlie Hebdo of the outpouring of support from millions of Americans when they were attacked. pic.twitter.com/KRPenXWC3r

Last month, Charlie Hebdo upset many, the UK Independent reported, with its front-page cartoon on the Barcelona terror attack. The cartoon showed two people who had been run over by a white van. The headline read, “Islam, religion of peace…eternal.”

Last year, the city of Amatrice, Italy sued Charlie Hebdo over its cartoon about victims of the August 2016 earthquake that killed around 300 people in Italy. The cartoon showed two victims covered in blood and identified as Italian dishes. A third dish, labeled as lasagne, showed victims in between layers of pasta. Also in 2016, Charlie Hebdo upset many for its cartoon of Aylan (or Alan) Kurdi, the Syrian toddler refugee who died on a Turkish beach New Year’s Eve 2015.

Charlie Hebdo‘s office was attacked in January 2015, in response to the magazine’s cartoons mocking Mohammad and Islam. More than a dozen people were killed in that and later attacks in Paris that week.

Charlie Hebdo Cartoon: God ‘Drowned all the Neo-Nazis of Texas’