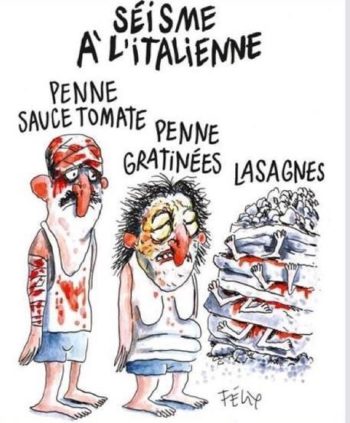 The Charlie Hebdo cartoon about the Italian earthquake in August.

Charlie Hebdo, the French satirical magazine, is being sued for criminal defamation over its September cartoon depicting Italian earthquake victims splattered with lasagna and other Italian dishes. Nearly 300 people were killed in the August earthquake and the town of Amatrice was “one of the hardest hit.”

The town’s lawyer, Mario Cicchetti, called the cartoons “macabre, senseless and incomprehensible” in an interview with the Associated Press. Cicchetti told the AP “the dead, the survivors” were defamed. “They each lost three, four people — relatives, children, fathers and mothers, sisters and brothers, friends.”

Cicchetti told iMediaEthics by e-mail that he filed in court Sept. 13 over cartoon, as well as a second cartoon that had the words “C’est pas Charlie Hebdo here construit vos moisons, c’est l a Mafia,” which he said “blamed the devastation of central Italy” on the Mafia.

He said he and the town of Amatrice found the cartoons “Very offensive.”

“These cartoons, in fact, not only offend the memory of all the victims of the earthquake but also the people who survived and the entire city, as well as Italy,” he told iMediaEthics by e-mail. “Both cartoons are unacceptable.”

Amatrice plans to donate all of any defamation verdict to “the people who lost everything during the earthquake,” he told iMediaEthics. 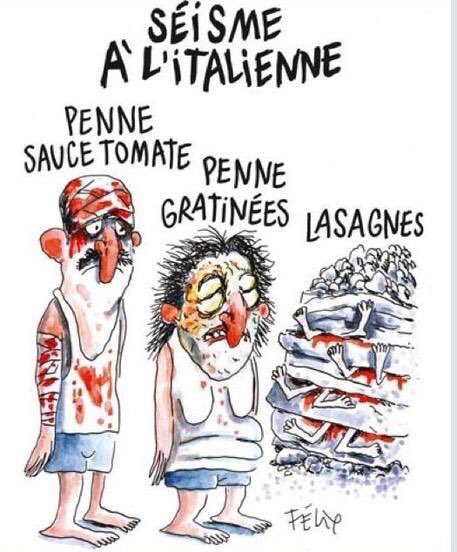 The Charlie Hebdo cartoon about the Italian earthquake in August.

iMediaEthics has contacted Charlie Hebdo for comment but has received no response. The magazine told CNN “Charlie Hebdo‘s newroom has no comments to make. For now, they are not intending to respond to this situation.”

The offices of Charlie Hebdo were attacked by Muslim terrorists in January 2015 after publishing cartoons depicting Mohammed. Twelve people were killed in the January 7 attack.

Earlier this year, the magazine was criticized for its cartoon of Aylan (Alan) Kurdi, the Syrian toddler who drowned on a Turkish beach in 2015. That cartoon showed two men chasing women with an inset image depicting Kurdi and text claiming that Kurdi would have grown up to become an “ass groper in Germany.”