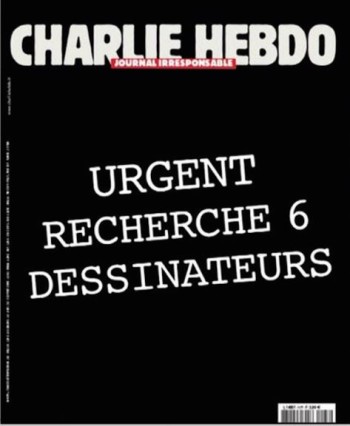 A photo of satirical magazine Charlie Hebdo’s front page circulated this week following the attack on its office.

But, the photo isn’t from Charlie Hebdo‘s office. It came from a satirical TV show.

Charlie Hebdo is expected to publish a million copies of its issue next week, and organizations including Google and the Guardian Media Group said they are donating money to the magazine.

The episode is available on Canal Plus’s website. Watch it below.

According to Mediaite, the fake cover gained attention after Reuters European editor Pierre Briançon posted it on Twitter.

Briançon appears to have deleted his tweet of the cover.   Briançon confirmed via e-mail to IMediaEthics that he tweeted it and explained more:

“Yes, sorry I tweeted it. By the time I realised it was a (very realistic) satire of the satire and pulled it off, it had gone viral. I probably should have tweeted a retraction/apology. No excuse here, day had been a bit hectic. Good lesson for me though.”

Liberation noted in its news report about the cover image that Charlie Hebdo held its meetings for the next edition in Liberation’s office.See it below

The magazine confirmed its publication of images of Muhammad, Reuters reported. Charlie Hebdo lawyer Richard Malka said, “we will not give in,” during an interview with France Info radio, as reported on by Reuters. “The spirit of ‘I am Charlie’ means the right to blaspheme.”

Read all of iMediaEthics’ coverage of Charlie Hebdo.