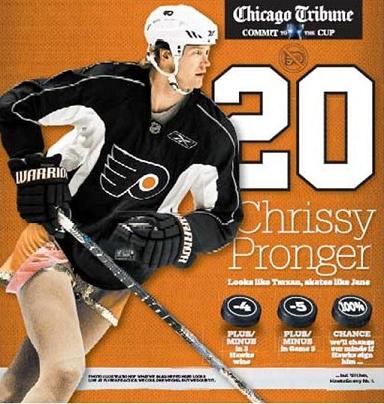 That’s because on June 8 the Tribune photoshopped  a skirt on a picture of the hockey player to mock him and even renamed him “Chrissy Pronger.”

Pronger plays for the Philadelphia Flyers hockey team.  If you’re not a hockey fan, you may not know that The Chicago Blackhawks defeated the Flyers June 9 to win the Stanley Cup.

Time magazine wrote June 9 about the image wondering:  “Is it a newspaper’s job to report on the news or make new news for others to report on?”  In this case of the cross-gendered image, the Tribune made the news, as media outlets and blogs reported on the photo and reactions to the photo.

Some call it childish, some call it unoriginal, and others are calling it sexist.

The AP reported June 8 that women’s hockey Olympic medalist Angela Ruggiero called it offensive.  The AP reported that she said
“I’d like to see that editor out on skates. I’ll take them one-on-one on the ice any day. They obviously have never seen women’s hockey and are living in the dark ages.”

New York Daily News reported that Tribune sports editor Mike Kellams apologized to those who were offended by the photo, including Ruggerio. “There is no other guy in orange who commands attention like Chris Pronger does,” The Daily News reported Kellams said . “That’s just the way it is right now – he’s the villain, he’s the enemy. We were just trying to tap into that emotion that is unique to sports, and we were just trying to have some fun in the paper. I don’t think that’s against the law.”

Philly.com wrote that the picture was “clever like sixth grade” and that the image seemed to be a rip off from the New York Post’s October front page of Shane Victorino. On October 27, the Post similarly photoshopped a cheerleader skirt onto the  Philadelphia Phillies‘ player, the day before the New York Yankees faced the Phillies in the World Series.  The Post also called the Phillies the “Frillies.”

USA Today’s Christine Brennan wrote a column June 8 about the sexism of the picture, writing that the newspaper’s managing editor – a woman – should have known better.

Pronger’s reaction? He said he didn’t pay attention to the photo. “I don’t read what you guys write. Good or bad,” The New York Daily News reported.

There were 238 comments June 10 at 9:30 AM EST, including Chicago Tribune reader John Wilson, who commented that the poster embarrassed everyone and that he is canceling his subscription. Chicago Tribune commenter Catie Bielecki wrote that she is disappointed in the image and that “there are more intelligent and witty ways to poke fun at our competitors than stooping to comparisons with sexist undertones.”

Digital Sports Daily wrote wondering if the Chicago Tribune “jumped the shark” with the photo.