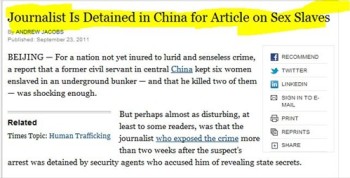 A Chinese journalist has been “detained” and accused of “revealing state secrets” after he broke a story claiming that former Chinese civil servant, Li Hao, had kidnapped and kept six women as sex slaves, the New York Times reported.

According to the Times, the journalist, Ji Xuguang, claims that Chinese authorities want to cover up the crime and defended his work.