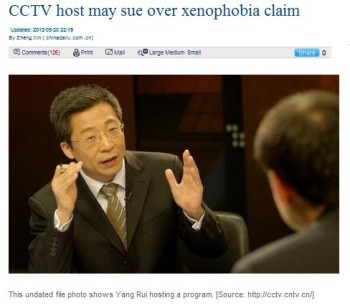 Yang got a lot of attention for his posts on social media site Sina Wiebo, according to Morning Whistle and the Atlantic.  He had called for the government to “clean out foreign trash,” referring to foreigners and commented on the recent closure of Al Jazeera’s Beijing bureau.

The full text of Yang’s post, via the Wall Street Journal, reads:

“The Public Security Bureau wants to clean out the foreign trash: To arrest foreign thugs and protect innocent girls, they need to concentrate on the disaster zones in [student district] Wudaokou and [drinking district] Sanlitun. Cut off the foreign snake heads. People who can’t find jobs in the U.S. and Europe come to China to grab our money, engage in human trafficking and spread deceitful lies to encourage emigration. Foreign spies seek out Chinese girls to mask their espionage and pretend to be tourists while compiling maps and GPS data for Japan, Korea and the West. We kicked out that foreign bitch and closed Al-Jazeera’s Beijing bureau. We should shut up those who demonize China and send them packing.”

“These vicious lies do not represent the vast majority of foreign citizens in China. It is extremely insulting that an anchor on CCTV Dialogue, a show that is meant to be about intercultural exchange, would propagate such racist, hateful speech.  We request that CCTV terminate Yang Rui’s contract immediately and condemn his prejudiced and inaccurate (Sina) Weibo post.”

In response to Custer’s blogpost, Yang said he might sue for libel and called himself a “sincere and conscientious host who has been devoted to international cultural exchanges for 13 years,” according to China Daily.

Yang defended his original comments, according to China Daily, saying “I stick to my opinion, even if my wording is harsh.”  He also said, The Guardian reported May 21, that

“The wording, I acknowledge, is very strong and incompatible with my image as host of a professional talk show and I can say for sure I am sorry for hurting those who respect my profession.  I don’t mean I am beating a retreat from the principles that may be implied in the initial posting. The crackdown on illegal foreigners is a must. Ninety-five to 98% are honest people, well educated and abide by our laws … I am only talking about the bad guys.”

Further, Yang added that he “never meant to humiliate any woman” by using a word that can translate to “bitch,” which he noted “somehow carries an overtone of sexual discrimination.”

The Wall Street Journal published a statement from Yang about the incident here, in which he called his May 16 post “a wake-up call” that “no one should be above the law.”  He commented that his post was “a reaction of the moment” to online “videos I saw.”

“The more serious part of the accusations against me is the mischaracterization of what I said in Chinese,” he wrote.