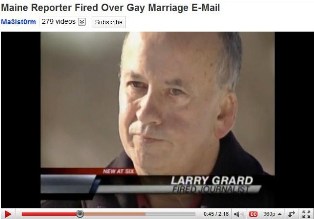 In this screenshot from a Maine TV news program, fired reporter Larry Grard says he replied to the Human Rights Campaign press release because he took offense to its contents.

The Catholic League of New York and the Christian Anti-Defamation Commission of California have signed on to support Larry Grard, who was fired last November from his reporter position at the (Maine) Morning Sentinel, Bangor Daily News reported. Grard believes his firing was based on his personal views toward same-sex marriage, but the newspaper has written it was over his misconduct in e-mailing those views to the Human Rights Campaign.

Bangor Daily News reported that Grard replied from his personal e-mail account to a press release from the Human Rights Campaign:

“Who are the hateful, venom-spewing ones? Hint: Not the Yes on 1 crowd. You hateful people have been spreading nothing but vitriol since this campaign began. Good riddance!”

As Fox News reported, Grard was fired on Nov. 10, less than a week after he sent the e-mail. But the question is begged: Since Grard responded from his personal e-mail, not his work e-mail, is it fair that he was fired?  Sending the e-mail was a lapse in judgement, Fox News reported Grard said.

The Catholic League wrote April 7 in a news release on its Web site that “While the First Amendment does not apply to private organizations, the fact remains that if Grard can be fired for something like this, then the rights of all reporters are in jeopardy. This explains why the Portland Newspaper Guild is standing squarely behind him. So is the Catholic League. We put Grard and his wife in contact with law firms that may want to sue Mr. Thompson and his newspapers.”

Grard’s wife, who had been writing a column twice a month for the same newspaper, was fired just after her husband, the Catholic League wrote.

“It was suddenly decided that her work was ‘no longer a good fit,’” the Catholic League wrote.  “It sounded like reprisal to us.”

In a message to iMediaEthics, Grard wrote, “Despite her repeated inquiries as to why they discontinued her column, my wife got no specific reply. When pressed, an editor responded ‘It was no longer a good fit.’ In fact, she has the wrong last name.”

The Christian Anti-Defamation Commission wrote on the firing of Grard and his wife, that “By (Maine Today Media’s) harsh, draconian actions we believe that MaineToday Media has revealed itself to be an anti-marriage and anti-Christian organization.”

Bangor Daily News reported that the head of the Portland Newspaper Guild said the guild did petition for Grard because his firing was so quick.

“Tom Bell, a reporter for the Portland Press Herald and head of the Portland Newspaper Guild, which represents Morning Sentinel newsroom employees, said the guild filed a grievance on Grard’s behalf after his sudden dismissal.

Bell said that the company’s union contract contains language that calls for progressive discipline when dealing with an employee.’There are a series of steps you take before you fire someone,’ he said.  …

Bell said the union did reach a settlement but Grard didn’t accept and the guild won’t be pursuing arbitration, Bangor Daily News reported.  Grard wrote to iMediaEthics that the settlement he was offered wasn’t enough for the damage done to his reputation and career:

“After Dr. Cass with the CADC began to apply pressure, publisher Richard Connor suddenly offered a settlement. He went from $10,000 to $20,000 and the union suggested I settle for the latter. That is not nearly enough for smearing my reputation, and effectively ending my career as a journalist for daily newspapers. I had a perfect record in my 19 years with the paper.”

Grard told Fox News last December he thinks he should have received a lesser penalty because of his time with the newspaper.  In an interview with  CBS News affiliate WGME, Doug Ray reported Grard “offered to apologize or at least take an unpaid suspension.”

FoxNews.com reported that co-chairman of the Society of Professional Journalists’ Ethics Committee Fred Brown said that “Grard acted improperly as a reporter.  ‘He shouldn’t have done that,’ Brown told FoxNews.com. ‘You don’t let that kind of stuff out. [A reporter] should never let people who you might be reporting on know where you stand.’ Had Grard been an editorial writer, the situation would be different, Brown said. ‘He shouldn’t express any form of partiality,’ he said. ‘He gives up part of that ability.'”

In Maine Today Media’s statement on the matter, available on the Portland Phoenix Web site, the news organization wrote that it “emphatically denies the claims made by former reporter Larry Grard that his termination from employment was improper or discriminatory.  Mr. Grard’s termination was based on legitimate and proper business considerations.  His repeated public assertions to the contrary are filled with misinformation, misstatements, and untruths.”

“Mr. Grard was not terminated because of his personal views on same-sex marriage or any other public issue, nor did religion play any role in management’s decision,” the statement reads.  It does say that  “Mr. Grard’s unacceptable behavior, which he intended to be anonymous, was in response to a communication directed to the newspaper which he had access to as an employee of the newspaper.”

Grard wrote in a message to iMediaEthics that he was told his e-mail “was unprofessional and amounted to gross misconduct, even though there is no code of conduct at MaineToday Media.”

But, he believes his firing was political. Grard wrote to IMediaEthics that, “During the fall campaign to repeal the recently-enacted law allowiing same-sex marriage, I told my editor that I thought our coverage was biased toward the gay marriage said. He never treated me the same after that–I believe I was a marked man.”

The Catholic League is the nation’s largest Catholic civil rights organization.  The Christian Anti-Defamation Commission is a non-profit corporation “whose purpose it is to become the first-in-mind champion of Christian religious liberty, domestically and internationally, and a national clearing house and first line of response to anti-Christian defamation, bigotry and discrimination.”

iMediaEthics has contacted the Morning Sentinel and the Christian Anti-Defamation League and will update with any response.