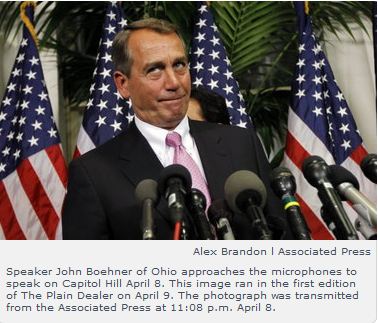 The Plain Dealer's readers representative explained to readers that it printed the above AP photo of John Boehner not because the paper is biased, but because it was the only one available at deadline time. (Credit: AP/Alex Brandon, Cleveland.com)

His column noted that the newspaper’s ethics guidelines call on staffers not to “affirmatively misrepresent” themselves but that they can “remain silent” about their identity.  That guideline led iMediaEthics to wonder if reporters can lie by omission, just not commission.  We asked Diadiun by email.  His explanation of the ethics guideline:

“It’s not accurate to say that we tell reporters to lie by omission. The point was that reporters aren’t always obliged to announce their presence and profession everywhere they go. It’s not an ethical breach to simply show up and remain silent about who they are, in order to observe how an institution treats the public, for example. But we don’t operate under false identities, or lie about who we are if asked.”

We also asked about what are the bigger ethical issues he encounters at the Plain Dealer.  Diadiun responded that “the complaint I most often hear is that we are biased in favor of liberals.”  While the newspaper’s editorials and opinion pieces tend to be liberal, Diadiun stressed the newspaper’s attempts to keep its news reporting balanced.

“The majority of our opinions are left, but when it comes to news, I think our reporters and editors do a pretty good job of playing our coverage down the middle, being fair to each side.”

Case in point, Diadiun noted that readers complained last week over an “unflattering photo” of John Boehner, published in the newspaper’s early edition. Readers thought it was an indication of an agenda, but the photo was just the only one available from the Associated Press at the time of deadline, according to Diadiun’s column.