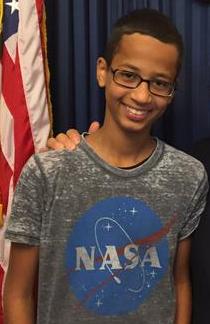 “Clock Boy,” aka Ahmed Mohamed, lost his libel lawsuit against Glenn Beck and TheBlaze over Beck’s on-air comments about the teen. As iMediaEthics reported last fall, Ahmed Mohamed’s father, Mohamed Mohamed, filed the lawsuit on his son’s behalf. Ahmed Mohamed gained national media attention in 2015 when, as a 14-year-old ninth grade student, he brought a homemade clock to his school in Texas to show a teacher. He was then arrested and accused of possessing a fake bomb, but the charges of a hoax bomb were dropped.

Mike Grygiel, lawyer for Beck and his site TheBlaze told iMediaEthics by e-mail, “Mr. Beck and TheBlaze are pleased at the Court’s faithful application of First Amendment principles pursuant to the Texas Citizens Participation Act, the very purpose of which is to protect free speech on matters of public importance through the summary dismissal of unmeritorious defamation actions.”

Law Newz reported that the lawsuit was thrown out under the state’s Anti-SLAPP statute and Beck and TheBlaze got court and attorney costs covered.

The dismissals were with prejudice, but NBC News reported that Mohamed’s lawyer said they were going to appeal the dismissals against several of the defendants. According to NBC News, “In a ruling filed Monday in 162nd District Court in Dallas County, state District Judge Marcela Moore dismissed the complaint against most of the media defendants — Beck and his website, The Blaze, the Center for Security Policy and [Jim] Hanson.” Hanson from the Center for Security Policy had commented on Mohamed during an appearance on Beck’s show for TheBlaze TV.

iMediaEthics has written to Mohamed’s lawyer Christopher Stoy for comment.