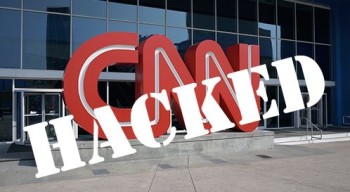 Fake messages related to Syria were posted, including “Syrian Electronic Army Was Here…Stop lying… All your reports are fake!” According to CNN’s news report, “the posts were deleted within minutes and the accounts have since been secured.”

The Syrian Electronic Army is a pro-Assad hacking group that has previously hacked numerous news sites’ accounts, as iMediaEthics has written.  Last year, the group reportedly attacked the New York Times‘ website. The Times explained at the time, “the disruption in service to nytimes.com was the result of an external attack on our domain name registrar, which redirected many users of nytimes.com to a bad domain address.” The Syrian Electronic Army has also taken credit for hacking Twitter accounts belonging to the Associated Press, the Financial Times, the Guardian, the BBC, Agence France-Presse and others. It has hacked NPR’s website and Al Jazeera’s mobile service as well.

New York Magazine’s Stefan Becket captured a screenshot of one of the tweets posted during the hack.  See below.

Another tweet that Mediaite captured, posted at 5:59 PM on the @CNN account said “Obama Bin Laden the lord of terror is brewing lies that the Syrian state controls Al Qaeda.”

Tonight, the #SEA decided to retaliate against #CNN‘s viciously lying reporting aimed at prolonging the suffering in #Syria.

#CNN used its usual formula of present unverifiable information as truth, adopting a report by Qataris against #Syria.

Instead of any actual journalism, #CNN turned into a loud horn calling for the destruciton of the #Syria-n state.

iMediaEthics has written to CNN asking for more details about the hacking of the blogs and will update with any response.