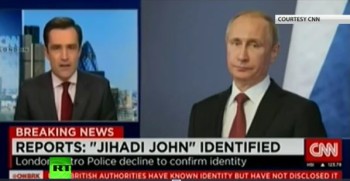 Jihadi John, who has appeared in ISIS videos, was identified as UK citizen Mohammed Emwazi, the BBC reported.

CNN apologized for the error in a statement to Russia’s Tass news agency, the Times of Israel reported.

The CNN statement reads: “Due to a failure of a video server during today’s breaking news broadcast, a photo of Vladimir Putin, prepared for our next report, was accidentally shown. We apologize for that mistake.”

iMediaEthics has reached out to CNN and  the Russian government for further comment.

The Moscow Times reported that it was the third Russia-related error CNN made in the past month, noting, “Earlier this month, CNN apologized for a caption that described Ukrainian forces as ‘pro-U.S. troops.’ A week later, the channel showed a map that appeared to mark Ukrainian territory as part of Russia.”

See a clip of that error below, via Russia Today.

CNN’s Carol Costello apologized for the error at the time, according to Mediaite, with a statement on air saying:

“The debate in western capitals is actually about whether the United States and other NATO countries should send arms to the Ukrainian military, which is trying to protect its territory from separatists whom the government in Kiev says are backed by Russia,” Costello said. “The recipients of any military equipment and aid would be the national military of Ukraine, certainly not pro-U.S. troops. I regret that error.”