CNN Errs in Phone Hacking Report: Says Coulson Wasn't Arrested, when he was in July

CNN Errs in Phone Hacking Report: Says Coulson Wasn’t Arrested, when he was in July 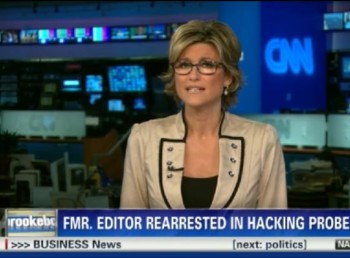 During March 13’s CNN Newsroom program, host Ashleigh Banfield spoke with CNN’s senior international correspondent Matthew Chance about the March 13 re-arrest of former News International CEO Rebekah Brooks.  During the brief segment, Banfield said of  Andy Coulson “I should point out, so far Coulson only questioned, not arrested in all of this.”

But, Coulson was arrested last summer related to the phone hacking scandal.

“Andy Coulson was arrested earlier Friday in connection with allegations of phone hacking and corruption.”

The article noted that Coulson was “released without charge.”

Coulson is the former communications director for UK prime minister David Cameron and a former editor at News of the World.

We have written to CNN for a correction and will update with any response.

CNN Errs in Phone Hacking Report: Says Coulson Wasn’t Arrested, when he was in July