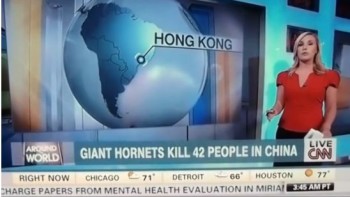 A screenshot of the geography error. (Credit: CNN via Daily Mirror, screenshot)

The Oct. 4 story on CNN’s website, filed from Hong Kong, reported that “since July, hornet attacks have killed 42 people and injured 1675 people in three cities in Shaanxi province, according to the local government.”

The UK Mirror posted video of the broadcasted segment with the map contained the mind-boggling error.

iMediaEthics has written to CNN asking if it will run a correction and how the error happened. We’ll update with any response.