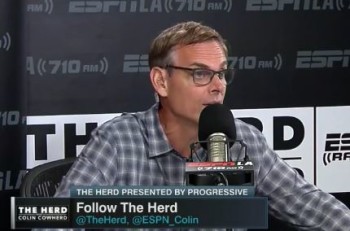 Colin Cowherd won’t be on ESPN anymore after comments about people from the Dominican Republic.

In a statement on its website last night, ESPN said:

“Colin Cowherd’s comments over the past two days do not reflect the values of ESPN or our employees.  Colin will no longer appear on ESPN.”

Earlier this week on ESPN Radio, Cowherd said baseball was not “too complex” and made negative comments about people from the Dominican Republic, saying they weren’t as academically smart as other people.  He said:

“A third of the sport is from the Dominican Republic. The Dominican Republic has not been known in my lifetime as having world-class academic abilities. A lot of those kids come from rough backgrounds and have not had opportunities academically that other kids from other countries have.”

Cowherd apologized July 24, tweeting “I did not intend to offend anyone w my comments. I realize my choice of words was poor and not reflective of who I am. I am sorry.”

I did not intend to offend anyone w my comments. I realize my choice of words was poor and not reflective of who I am. I am sorry.

He also commented further on his claims about the Dominican Republic in a segment on ESPN.

“I could’ve made the point without using one country, and there’s all sorts of smart people from the Dominican Republic,” Cowherd said in part, according to ESPN. “I could’ve said a third of baseball’s talent is being furnished from countries with economic hardships, therefore educational hurdles. For the record, I used the Dominican Republic because they’ve furnished baseball with so many great players.”

He added that “I’m not saying there’s not intelligent, educated people from the Dominican Republic. I cringe at the data, too.”

MLB responded to his comments calling them “inappropriate, offensive and completely inconsistent with the values of our game,” Mediaite reported.

ESPN noted “Cowherd, who had been with ESPN for 12 years, announced earlier this week that he’s leaving the company for another business opportunity.”

ESPN responded to the original comments made by Cowherd calling them “inappropriate” and said they “do not reflect ESPN’s values of respect for all communities,” Deadspin noted. 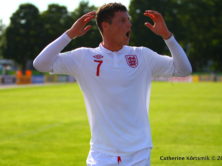 Sun apology: We didn't mean to 'slur' Ross Barkley by comparing him to a gorilla