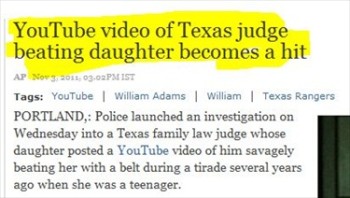 As iMediaEthics has previously written, the daughter of Texas family law judge William Adams published on YouTube a video of her father beating her 7 years ago.

The video itself has garnered much criticism and many questions.  But equally as questionable is this distasteful headline published by the Times of India to accompany a Nov. 3 Associated Press article.  The headline reads “YouTube video of Texas judge beating daughter becomes a hit.”

iMediaEthics finds this headline to exhibit both bad taste and insensitivity.  By focusing on the numerous views of the YouTube video with its headline, the Times of India suggests this video is entertainment, Also, suggesting that the crux of this news story of video footage of a judge beating his 16-year-old daughter is just how many YouTube views the video receives is equally insensitive.