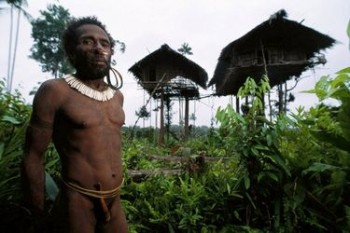 MORAL OF STORY? STEAL IMAGES WITH HEADLINE & CAPTIONS. After the EnvironmentalGraffiti.com publisher, Chris Ingham Brooke, said he did not have to correct errors, because he was a blogger, StinkyJournalism discovered that he had lifted 14 photos from photojournalist, George Steinmetz, without copyright permission. Brooke did not cotton to correcting his headline that wrongly claimed that Steinmetz's images were of a tribe in Papua New Guinea instead of the true location, West Papua, that was clearly labeled in Steinmetz's captions.(Credit: George Steinmetz)

However, if you are interested in “Green” matters but also with accuracy, you might want to consider relying on other sources besides the postings on EnvironmentalGraffiti.com.

The headline that caught imediaethics’s attention on this site, The Cannibalistic Tree People of Papua New Guinea, was wrong on its face.

Anthropologist Nancy Sullivan, who lives and works in Papua New Guinea, also confirms for iMediaEthics that the tribes depicted in the 14 photos by George Steinmetz were from West Papua, not from “Papua New Guinea.”

The headline asserts, as fact, that the tribal people depicted in the images actively practice cannibalism, even though the Environmental Graffiti article itself makes no such assertion.

In contrast, Steinmetz ‘s headline on his web site simply states, Tree People. He told imediaethics by phone that he was studiously mindful of accuracy in naming his subjects, while also indicating that the photos used by Environmental Graffiti are 14 years old. He also said that he did not witness any cannibalism in 1995, when he took the photographs, but was told about it by an expert working in the area.

The new headline? “The Cannibalistic Tree People of Papua” which is still in error as it incorrectly and unfairly states, as fact, that these people currently practice cannibalism.

We wrote Environmental Graffiti again. The author/blogger, Karl Fabricius responded by email: “The article does not definitely claim that the Korowai and the Kombai are cannibalistic to this day, saying rather that they ‘may still count cannibalism among their customs’. Various sources agree on this point, while many more state that historically cannibalism has been part of the tribes’ respective cultures. All source links used are provided at the bottom of the article. I will put what you have said to my editor, but am not sure he will be keen to change the article’s title again.”

We also asked Steinmetz if he gave permission to Environmental Graffiti for use of 14 of his West Papua images. He said he would take a look and get back to us.

Meanwhile, an email arrived from Chris Ingham Brooke, Managing Director, Environmental Graffiti Ltd, who was, as author Fabricius predicted, unhappy to have heard from us. Instead of thanking us for pointing out errors, he claimed that we, by informing his author of errors, were “interfering with Karl’s work. And I do not take kindly to this.” Rather than comprehend that our issues with his headline involved facts (that is, the 14 photos are NOT of Papua New Guinea tribal people but from West Papua), he instead couches our suggestion for corrections as our “opinions.”

Really? If that is the case and how www.EnvironmentalGraffiti.com handles corrections, the public should be informed to make their own judgment of whether or not to trust its information, or even visit the site? Indeed, from what imediaethics knows, accuracy is a basic ethical value in both journalism and blogger practice. There is no free pass for accuracy just because you are a blogger.

Robert Cox, founding member of the Media Bloggers Association said by phone that their organization shares similar values with journalism when it come to accuracy. Under the heading “Standards we encourage” the section, “Accountability and trust” states “Correct your mistakes promptly using strikethroughs or editor’s notes.” Cox takes issue with the idea that bloggers somehow are part of some sort of single group. “I don’t accept that. That’s silly,” he said. The term “blogger,” Cox said, “Is an empty vessel to pour anything they want into…The ultimate test is the trust relationship between [the blogger] and readers. Violate that trust relationship and, like in journalism, you lose readers.”

“There is no legal requirement to be truthful,” Cox continues, “Their only legal obligations involve defamation and copyrighted property.”

Kate Murphy, of Agence France-Presse, reported on June 1, 2009, “The majority of cases against bloggers are for defamation but they are also frequently sued for copyright infringement and invasion of privacy.” She quotes Sam Bayard, assistant director of the Citizen Media Law Project at Harvard University, “‘There’s this Wild West mentality where people think they can do anything on the Web and not be held liable,’ said Bayard.”

Meanwhile, Steinmetz checked the Environmental Graffiti site. It turns out that the site, in fact, did not obtain permission to post his 14 photographs, even though Steinmetz’s web site states in plain English: “All images © George Steinmetz. Please contact us for usage.” He copied to us the email with the firm words he had for Brooke. : “Please remove my copyrighted photographs (http://www.environmentalgraffiti.com/featured/the-tree-people-of-papua-new-guinea/12109) from your website immediately. You have made no attempt to contact me for permission to publish my photos on your website, and if they are not removed within 24 hours you will be hearing from my attorney.”

Brooke soon got back to Steinmetz notifying him the photos were removed, and blaming another web site for his malfeasance. Brooke said that they found the images on the Fun Fever blog. Even though Environmental Graffiti linked directly to Steinmetz site, that has the clear copyright statement, Brooke still claims they thought the images were under a free-use, Creative Commons license.

So I went to Fun Fever blog, which had no Creative Commons logo or release accompanying Steinmetz’s images, just a “disclaimer” at the bottom of the page. It states: “We find images from the Web that are believed to belong in the public domain. If any stories or images that appear on the site are in violation of copyright law, please email and we will remove the offending information as soon as possible.”

Apparently, Environmental Graffiti cherry-picked through the 26 unauthorized images posted on FunFever belonging to Steinmetz in order to select the 14 that were posted on the site, also without permission. A Environmental Graffiti fan, “cakebelly,” also posted all 14 images (that did not belong to him or them), onto ClipMarks.com that drives more traffic to their site.

Those 14 images on ClipMarks, and the 26 on FunFever, still remain posted today despite Steinmetz’s demand for removal (and FunFever’s disclaimer that promises to remove copyright violations “as soon as possible”). He thanked us for letting him know and, understandably, finds having to threaten and chase thievery of his images exhausting.

Environmental Graffiti has the patina of a professional web site. Its slick design with paid sponsorship and advertising glisten with credibility. The “about us” section for Environmental Graffiti states: “Born in May 2007, Environmental Graffiti is an eclectic mix of the most bizarre, funny and interesting environmental news on the planet. We search the vast realms of the Internet on behalf of all environmentalists who don’t take themselves too seriously and compile it into a daily blog. Surf and enjoy! As of May 2008 (Google analytics statistics), we received 1.3 million page views and 1 million visits.”

Copyright theft is the real cannibalism

imediaethics believes it is a shame that Environmental Graffiti (with its post on ClipMark) and Fun Fever continue cannibalize Steinmetz ‘s copyrights while profitting from selling ads and solicting vistors. Steinmetz promises to update  us.

He wrote, “I sent an email to funfever again last night, but they still have not removed my copyrighted photos from their site, so I just sent a note to Google which hosts their site to lodge a complaint of copyright violation. I’ll let you know what happens.”

“What a headache this infringement has become,” Steinmetz said, “and what a pain to try to stop them with no apparent penalty to them for the infringement.”

UPDATE: 06/16/09: 11:26pm: Steinmetz just let us know that he was notified by the Fun Fever web site “Blogger Team” that his 26 photos were finally removed. Still no word from Clipmark.