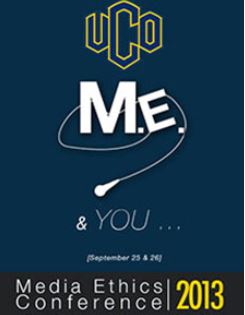 The Univ. of Central Oklahoma is holding a media ethics conference this week. (Credit: UCO, screenshot)

The University of Central Oklahoma is hosting what appears to be a comprehensive conference on various issues related to media ethics.

The Sept. 25 and 26 conference will include a discussion on “Ethics, the NSA, and the Media,” and reporting on “horror” as well as holding workshops on ethics.

The NSA session addresses the ethics of the NSA’s actions in relation to the media. “The National Security Agency has spied on at least two media outlets — the Associated Press and Al Jazeera — and also has looked at citizens’ phone records in an effort to protect the United States,” the university’s website states. “But is even that lofty goal worthy of invading the privacy of citizens and private business? Is it ethical?”

The horror discussion, “Covering horror: When Journalists See What No One Should Have to,” will address how to report on “crime scenes, disaster sites, abuse stories.” There will also be panels on reporting ethically, “Ethics in Broadcast Journalism,” “Ethics for Sale: Decisions in Advertising,” “Ethics of Photoshop,” and more.

The university’s Yvette Walker, Ethics Chair for the Mass Communications Department, explained to iMediaEthics by email how the university picked this year’s theme, “Facing the Present and Charting the Future.”

“Every year we try to develop a theme based on what’s topical and relevant in the news,” Walker wrote.

She added that the “media ethics-based” workshops related to students’ majors, such as broadcast journalism. “The discussion of ethics, as it relates to our job as journalists, PR professionals and mass communication specialists is as important today as it ever was.”

Al Jazeera TV reporter Josh Rushing, formerly with the Pentagon and Marine Corps, is one of the guest speakers and will make the keynote address, “From Marines to Al-Jazeera.”

“His reporting has taken him to Iraq and Afghanistan ten times, often embedded with soldiers and Marines at the invitation of their commanders,” the university’s website states. “With the recent launch of Al Jazeera America, Rushing’s work is very timely indeed. He’ll talk about how he performs his job ethically, while seeking out truth and telling stories of people who often are voiceless.”

Walker said that Al Jazeera America’s creation is “important” and that “Rushing will share his experience in ethical news storytelling.  Our guest speaker, Doug Mitchell, will touch of jobs in the media, which is a very relevant topic to our graduating students.”

UCO’s Walker told iMediaEthics that this year’s conference is “the third year we have held a two-day conference with a keynote speaker and a  variety of skill-based workshops.”

iMediaEthics wrote about last year’s conference, which focused on ethics in “sports, politics and news.”