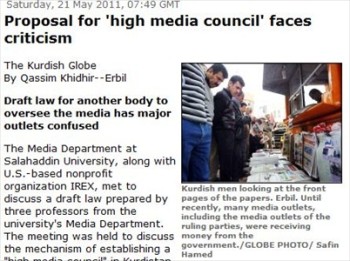 A Kurdistan university’s media department has proposed a law to create a “high media council” but there’s both confusion and criticism for the possible media group, which would be the third media regulatory body for the area, Kurdish Globe reported.

“Some media experts say the council will monitor the media outlets for ethics issues, while others believe the council will be similar to an Islamic Fatwa committee (a legal pronouncement in Islam, issued by a religious law specialist on a specific issue), which will decide which media outlets comply with Islamic principles.”

Media department dean Razwan Badini from the university, Salahaddin University, explained the council will address reports of “violence against journalists” and that the council would be independent of politics and government.

Meanwhile, three “financially independent newspapers and magazines,” Awene, Hawlati and Lvin have rejected the idea and stated they believe the council would be a media control group.