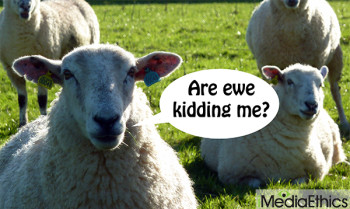 Will there be ramifications at the UK Daily Mail and Telegraph for the baaad reporting? Or perhaps they don't give a flock. (Credit: Illustration by London Shearer Allen, Image by Becks via Wikipedia)

The UK Daily Mail and Daily Telegraph both slammed the BBC earlier this month for renting rooms at the Dalmahoy Country Club, where 65 members of its staff stayed while filming the popular program Lambing Live.

The gist of the two stories was the allegation that the BBC spent too much money for accommodations at a fancy hotel when the BBC could have stayed in many other cheaper alternatives, including B & Bs.

iMediaEthics investigated the two reports and found a host of ethical concerns including accuracy, plagiarism, proper attribution and quote manipulation.

For example, we confirmed that both outlets published a manipulated quote and failed to disclose to readers it was robbed from a blogpost, not an interview they had done. iMediaEthics also found that the Telegraph also lifted without attribution a quote obtained by the Mail and that the Mail apparently plagiarized in part from the Telegraph.

Lambing Live is a popular and successful BBC Two program that focuses on sheep farming in the spring.

The BBC’s spending is of public interest as The BBC is publicly “funded by British TV licensing fees.”

But, the facts of the case are that the BBC, as corporations frequently do when renting large blocks of hotel rooms, actually got a significant room discount, and only paid £58 (about $100 U.S.) per night per room.

Plus, as a BBC spokesperson explained, the hotel met important criteria for logistical arrangements coordinating lodging and transportation for 65 people:

Let’s start with what the stories reported: the BBC’s choice to put up 65 employees in the Dalmahoy Country Club.

The Dalmahoy Country Club is a Marriott hotel. The hotel has 203 rooms and 12 suites, according to its website.

Both the Mail and Telegraph stories said the hotel can cost up to £279 a night per room, suggesting that the BBC was extravagant and wasting money.

The UK Press Gazette noted, however, that it “spent hours on the Dalmahoy site trying to find a room even approaching” £279  but “the most expensive room we could find was £120, the average price £107.”

Below, see the lowest room rates for the rest of April. The chart is from the hotel’s website.

The Dalmahoy lists its lowest rates for the rest of the month in this calendar. (Credit: Dalmahoy website)

So why then did The Telegraph’s original headline read: “BBC’s Lambing Live criticisd after 65-strong film crew stayed at £279 a night hotel for week”?

(iMediaEthics asked the Hannah Cadwallader, Director of Public Relations, Europe for Marriott Hotels International Limited, for confirmation of the rate and asking how many rooms the BBC booked, but she declined to comment as “we cannot share detailed information about our guests.”)

At some point, the Telegraph changed its original headline to read: “BBC’s Lambing Live criticised after 65-strong film crew stayed at luxury hotel for week.”

The Telegraph soon published a note at the bottom of its article explaining the change in headline. It reads:

“The headline in this article originally stated “BBC’s Lambing Live criticised after 65-strong film crew stayed at luxury £259-a-night hotel for week”. The price was deleted from the headline to reflect the cost referred to in the story, which the BBC did not supply until after the article was published.”

It also posted a note on its story that reported that the BBC paid a fraction of what the Mail first reported. That note reads:

“The BBC asks us to point out that in fact the BBC paid £58 per night, not the £279 quoted. This rate amounted to a discount of around 50% off the standard rate, substantially less than other hotels in the area and within the BBC expenses policy. Having the team stay in one location simplified travel arrangements to and from the farm. They also say that a crew of 65 is typical for a production of this kind.”

Both the Mail and the Telegraph articles raised the question about why the BBC didn’t stay in bed and breakfast inns or other hotels.

For example, they quoted the owner of a nearby bed and breakfast, the Meadows Bed and Breakfast, saying she would have put the staff up.

But, as BuzzFeed noted, that bed and breakfast only has three rooms — only enough to host about 5% of the BBC staff. The Meadows’ website states:  “The Meadows Bed and Breakfast near Edinburgh is a modern 3 bedroom detached house.”

Logistically, it would be too difficult and even more expensive to divvy staff up among a dozen or more bed and breakfasts as it would extend complications involving travel, booking and transportation.

Further, BuzzFeed noted that two of the rooms at the B & B cost at least “£65 per night,” which is, of course, more than the BBC paid per room at the Dalmahoy Country Club.

iMediaEthics asked the Meadows B & B owner for confirmation of the prices and number of rooms in her inn but she pointed us to her website.

Accuracy aside, iMediaEthics also was struck by the similarities between the Telegraph and Mail’s articles, both posted April 6 on the web.

Specifically, many of the quotations in the two articles are the same and some of the wording of the Mail‘s article is copied and pasted verbatim from the Telegraph’s.

First, let’s start with the quotes.

The Telegraph quoted the following people:

In its report, the Mail quoted all of those people except for Hamish Dykes.

The quotes attributed to Hogg, Thain and Isaby are all the same. Often people send the same statement to multiple outlets.

But, iMediaEthics asked if each outlet obtained the quotes themselves, or did the Mail lift the Telegraph‘s quotes?

Turns out, neither outlet contacted Hogg for comment; instead, without proper attribution, they lifted his comments published in a blog on the Scottish Gamekeepers Association’s website, iMediaEthics learned.

Neither outlet properly sourced in their articles that they quoted from a blogpost, which wrongly suggests to readers that the news outlets had interviewed Hoggs or received a statement from Hoggs.

“The statements were picked up from a blog which was written by Alex Hogg. Alex was not interviewed by either title. You can still see the blog post on the front of the Scottish Gamekeepers Assoc official website.”

Stephen confirmd that Hogg’s blogpost was never altered. Therefore, the news outlets quoting the altered quote must have done so themselves.

Another person quoted, Jonathan Isaby, from the TaxPayers’ Alliance told iMediaEthics by e-mail that he provided his statement to only one news outlets — the Scottish Mail on Sunday. He wrote:

“The comment was given as a statement to the Scottish Mail on Sunday (and no one else). Any repetition of the quote elsewhere means it must have been lifted from the MoS or its website.”

Therefore, the Telegraph lifted Isaby’s quote without attribution for its report.

Isaby had told the Scottish Mail on Sunday

iMediaEthics asked him if when he gave the statement if he was aware that the BBC paid £58 per room per night. Isaby said he was not. Further, had he known that, he said the BBC hotel stay wouldn’t have been an issue.

“We were most certainly not aware of the BBC statement about rooms costing £58 when we gave our statement – that is clearly a reasonable cost and we would not have had concerns about that price for a room,” he wrote.

The alliance’s Political Director, Dia Chakravarty, added that the Scottish Mail on Sunday journalist “provided us with all the information and we provided a reactive statement.”

iMediaEthics has written multiple times to Thain asking if she both spoke with both news outlets. We’ll update with any additional information.

But, the Telegraph and Mail didn’t just quote from Hogg’s blogpost — they also misquoted him and altered his comments to suit themselves.

“On another subject, I don’t live far from where the latest Lambing Live was filmed for the BBC. It was interesting that, in the same week civil offences for not paying TV licences were being mooted, the broadcaster was flexing its financial muscle. How many BBC employees were needed to run some cables round a lambing shed? A dozen maybe? Twenty max? Eighty people were used and did they check in to the local B&B? No. They stayed in some very exclusive country club. It must be tough being the Beeb.“

However, the Telegraph and the Mail both quoted Hogg as saying:

“I don’t live far from where the latest Lambing Live was filmed for the BBC.How many BBC employees were needed to run some cables round a lambing shed? A dozen maybe? Twenty max? Almost 70 people were used and they stayed in some very exclusive country club. It must be tough being the Beeb.”

The Telegraph and the Mail also edited his quote to combine two sentences without indicating this to readers.

It would be very unusual for two separate news outlets to edit a quote in two exact ways. Therefore the only logical conclusion is that one outlet lifted the quote from the other and didn’t check it against the original Hogg blogpost.

Plagiarism in the Mail

But, inaccuracy, errant sourcing for quotes and quote manipulation isn’t the end of it.

The Mail also appears to have directly plagiarized from the Telegraph. There is some verbatim content and very similar wording.

iMediaEthics has written to the Telegraph for comment about our report.

iMediaEthics also asked the Mail about its plagiarism of the Telegraph‘s article, the Telegraph lifting its quote, and the other issues raised in this report. An e-mail fromThe Mail managing editor office only responded to say that it got the Isaby comments from its sister publication The Scottish Daily Mail and that it published a letter to the editor crtiical of the Mail’s coverage. The letter was from Lambing Live executive producer Lisa Ausden.

A BBC spokesperson declined to comment beyond the already published statements about its decision to stay at the Dalmahoy.

Corrections: The Roomba didn't do it! Irish Libel Law, Irish or British, How many Troops Abroad?
Why CBC says documentary on Trial co-produced by lawyer's daughter not conflict of interest
CBC Report on NRA broke guidelines, included opinion