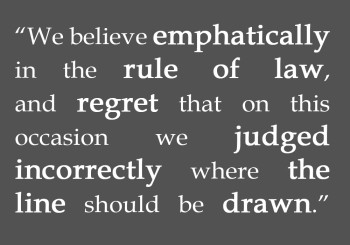 The UK Daily Mail has to pay £40,000 (around $58,000 U.S.) for a September 2015 story that may have identified a possible sexual assault victim, the Press Gazette reported. The UK law bans doing so.

The possible victim was a man who said his father “farmed him out to a cabal of VIP paedophiles,” including politicians, and who said he witnessed a murder. The police began an investigation into the man’s story, the Mail reported at the time.

After more than a year, the police found “no corroborative evidence to support lurid, horrific and, for some, extraordinary murder allegations from a single witness,” The Guardian reported earlier this year.

The Mail pointed iMediaEthics to its Page 8 May 12 print story about the fine, which reported, “Associated Newspapers [the Mail‘s publisher] pleaded guilty yesterday to inadvertently identifying a man who claims to be the victim of a VIP child sex ring.”

“The publisher of the Daily Mail and MailOnline accepted that detail in article could have led readers to identify the man, known only as ‘Nick,'” the article reads, noting that the previous Mail coverage “included a pixelated photograph of the man and some personal details.”

The Mail‘s article noted that the judge, Deputy Chief Magistrate Emma Arbuthnot, found the article in the public interest, but commented, “The offence is serious and I am particularly concerned about the damage to public confidence that complainants’ identities will be prosecuted.”

Associated Newspapers said in a statement in the article,

“We believe emphatically in the rule of law, and regret that on this occasion we judged incorrectly where the line should be drawn.

“This prosecution follows the closure of Operation Midland, which was robustly criticised by the Daily Mail and Mail Online.
“It is an extraordinary irony that the only conviction to result from this sorry episode, which caused such pain to Lord Brittan and his widow, and to Lord Bramall and his late wife, is against a media organisation which reported it with the objectivity so lacking in police enquiries.”