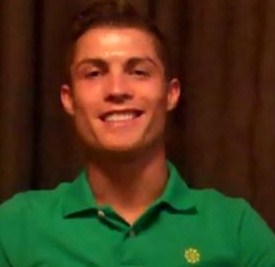 The Daily Telegraph apologized to Cristiano Ronaldo, pictured above in a screenshot detail from his YouTube channel. (Credit: YouTube, "CristianoRonaldo")

Cristiano Ronaldo won a libel case against the UK Daily Telegraph for a July 2008 story alleging the soccer player partied while injured.

The July 18 story, “Ronaldo Back in the Limelight,” alleged that Ronaldo, who at the time was playing for Manchester United and is now playing for Real Madrid, partied and danced in a Los Angeles nightclub while he was recovering from an injury. It was accompanied by a photo of Ronaldo on crutches, and “described how Cristiano put his crutches down to take to the dance floor with four models before being served ‘£10,000 worth of Cristal champagne’.”

However, Ronaldo’s lawyer, Allan Dunlavy, explained that the claims were false and argued that the article “caused embarrassment, offence and distress,” the Associated Press reported. The UK Press Association explained that Dunlavy detailed the impact of the claims as possibly affecting the reputation of Ronaldo, his fans, his manager and his team.

“While he did attend the nightclub in question, he did not drink any alcohol at all whilst there, nor at any time whilst in Los Angeles,” Reuters reported Dunlavy said. “He does not, as a rule, drink alcohol because he takes his health, fitness and recovery from injury very seriously. Nor did he put his crutches down to take to the dance floor despite the risk to his injured ankle.”

The Telegraph apologized for the story and is to pay “substantial damages” plus Ronaldo’s legal fees, the AP reported.

In its Nov. 9 apology, the Telegraph called its claims “not true” and explained that while Ronaldo was at that nightclub, he didn’t drink alcohol and didn’t put his crutches down so he could dance.  “Instead, he sat in a private corner as arranged in advance, along with friends who had travelled to Los Angeles with him, resting his foot and drinking non-alcoholic energy drinks at all times under the care of the respected Portuguese national team physio Antonio Gaspar,” the Telegraph’s apology reads.

iMediaEthics was unable to find the story on the Telegraph’s website as of Nov. 9.

Ronaldo accepted the apology.  “I am delighted with this outcome.  I take enormous pride in my professionalism. I treat my training and recovery from injury very seriously and would never have drunk and danced in a nightclub without my crutches as the Daily Telegraph falsely claimed,” the AP reported Ronaldo said in a statement.