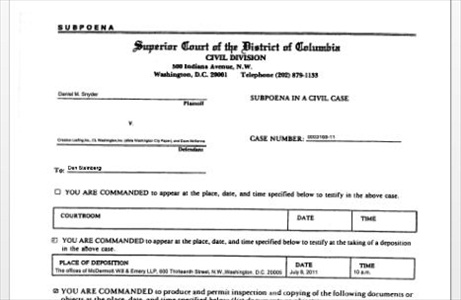 The Washington Post recently ran an op-ed by Snyder in which Snyder explains why he is suing the Washington City Paper over this piece by City Paper’s Dave McKenna called “The Cranky Fan’s Guide to Dan Snyder.”  (See StinkyJournalism’s February story when Snyder first filed the lawsuit here.)  Snyder has complained over statements made in the fan guide and a doctored photo of Snyder that accompanied the article.

According to City Paper, Snyder’s subpoena calls for “all documents evidencing or relating to any communication between [Dan Steinberg] and McKenna pertaining to Snyder,” Snyder’s wife, and Dave McKenna’s “fan guide.”  The subpoena also wants any evidence for why the Post linked to City Paper guide and any policy information about why and how the Post links to other stories.

Snyder appears to want to find out if “there was any agreement between McKenna and Steinberg to cross-promote McKenna’s pieces on Snyder,” according to City Paper.

Commenting on the subpoena, which requests all communication including “telegrams,” the Huffington Post opined:

“My favorite part of the subpoena is the fact that Snyder’s team is seeking all manner of documents, including ‘projections’ and ‘telegrams.’ What about semaphore communications, carrier pigeon relays and old-timey daguerreotypes?”

The Post’s blogger, Steinberg, had “linked to” the fan guide and commented about it.  The post in question appears to be this Nov. 18, 2010 post by Steinberg, which noted McKenna’s fan  guide and provided a link to the fan guide’s online presence. Steinberg disclosed in that post that he is “good friends” with McKenna. As Steinberg described it:

“It’s an encyclopedic takedown of Snyder’s decade of Redskins ownership, with just about all the horror stories gathered in one place.”

As City Paper describes, “Steinberg writes about the off-field antics of just about every sports figure in the area, and he’s often linked to McKenna’s work; the two are friendly rivals on the same culture-and-business-of-sports beat. ”

Huffington Post noted that McKenna has also worked as a music and style freelancer for the Post “for several years.”

City Paper noted that the Post’s spokesperson and Steinberg didn’t comment and that the Redskins’ spokesperson hasn’t passed on any immediate response.

The subpoena is posted on City Paper’s website here.

Snyder’s April 25 Washington Post op-ed labeled City Paper “a tabloid paper that published false and reckless charges.” He noted that he was refiling his lawsuit but explained the re-filing as for “legal reasons,” and claimed that “the rest of the complaint is essentially the same.”

StinkyJournalism is writing his office to ask about these changes to the lawsuit. We will update with any response.

Snyder asserted that his suit isn’t for money or McKenna’s firing but to “correct the record” and obtain an apology.  He stated that he would have dropped the lawsuit if City Paper gave him an apology and retraction for “false and damaging attacks on my integrity.”

Specifically, Snyder highlighted the charge that he “got caught forging names as a telemarketer,” which he says is a false charge that damages his business integrity. Snyder also claimed he’s never “sued people who publish critical opinions of me, nor have I previously sued any news organizations.”

Accompanying the online version of the fan guide, City Paper includes a link to its “legal defense fund” to help with the newspaper’s legal costs.

The Huffington Post cited comments recently made by Snyder’s spokesperson Tony Wyllie at an “Ethics in Sports Media” panel discussion.  See the whole transcript from that discussion, which was hosted by the University of Maryland’s journalism college, here.

In that discussion, Wyllie, who is also the Redskins’ vice president, is quoted calling the lawsuit a “warning shot at other members of the media.”  Wyllie also likened Snyder’s lawsuit to the protests in Egypt earlier this year.  Wyllie reportedly stated:

“All we wanted was the truth, the same thing you heard up in Egypt where people were trying to find one thing — people getting hurt and beat up for one thing — the truth. And that’s what this is all about.”

Wyllie added that “we’re not trying to be bullies…we’re not trying to make anyone afraid” and called on journalists to carefully research. He also reportedly commented: “Ladies in this audience, some day your husband will stand up for your honor.”

iMediaEthics is writing to the Redskins, City Paper and the Post for comment and will update with any response.