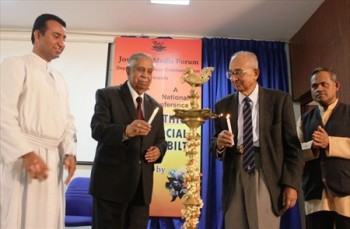 “Ethics and social responsibility should be the watchword of every journalist,” longtime Indian journalist B G Verghese said last week at a media ethics conference in Bangalore, India’s Express News Service reported.

Verghese went on, “That is why integrity and truthfulness become crucial in maintaining the profession of journalism.”

According to the Hindu, Verghese gave the keynote address at the two-day event which included “twenty-four scholars from across the country.” He also called for balanced reporting and objectivity in the media.

India’s St. Joseph’s College of Arts and Science hosted the  conference on Nov. 29-30.

The event was titled a National Conference on “Media Ethics and Social Responsibility,” the university’s website states.  According to the Hindu, the event is in response to “several controversies including corruption and paid news.” iMediaEthics is writing to the university to learn more. We’ll update with any response.