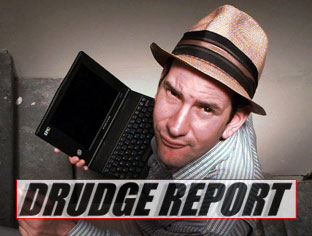 Copyright enforcement company Righthaven has filed its second lawsuit on behalf of the Denver Post’s content — this time seeking the domain name of the Drudge Report (and archive site www.drudgereportarchives.com) as well as $150,000 for damages.

The lawsuit claims that “Mr. Drudge has willfully engaged in the copyright infringement of the work,” the Las Vegas Sun reported.

Even though the Drudge Report archives site claims it has no involvement with Matt Drudge, Righthaven’s lawsuit argued “Drudge has been and is a direct financial beneficiary of the Drudge Archives website,” the Las Vegas Sun reported.

Jeff Bercovici blogged for Forbes noting that “the value” of the Drudge Report domain name “has been estimated at between $10 million and $20 million.”

Righthaven, now notorious for its lawsuits alleging copyright infringement, has filed more than 180 lawsuits on behalf of content published by the Las Vegas Review-Journal, as StinkyJournalism has been reporting.  The Las Vegas Sun noted that “an affiliate of Stephens Media LLC, owner of the Review–Journal, is an investor in Righthaven.”

When one clicks “play” on the video, a notice from NBC appears stating:

“This video contains content from NBC Universal, who has blocked it on copyright grounds.”

Several commenters on Frederick’s blog post poked fun at the irony. (Does Frederick believe that NBC should sue him? StinkyJournalism is writing to ask).

On Dec. 5, Righthaven filed a lawsuit against South Carolina blogger Dana Eiser-Bertoluzzi, claiming she violated copyright by publishing a Denver Post  column on the blog Lowcountry912. It was the first lawsuit on behalf of the Post, which published a notice to readers in the middle of November reminding about copyright protections.

Eiser-Bertoluzzi didn’t even know she was being sued until iMediaEthics contacted her Monday seeking an interview.  She told StinkyJournalism she received a summons on Dec. 7. Lowcountry912 is the site for a grassroots organizations of the same name for which Eiser-Bertoluzzi is president.  Since hearing of the lawsuit, the Denver Post column in question has been removed by Lowcounty912.

iMediaEthics wrote to Eiser-Bertoluzzi after the lawsuit against Drudge was reported.  She wrote to us:

“I am disappointed to hear of another victim. After reviewing my paperwork it appears that there is no actual damages amount stated. However, they have demanded forfeiture of the domain name of our blog and court/attorney fees.”