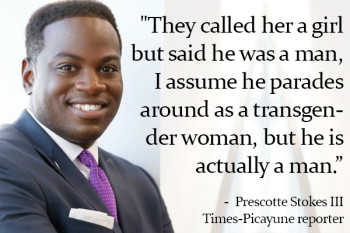 The Times-Picayune was criticized last month for calling murdered transgender woman, Penny Proud, a man in a story on the newspaper’s NOLA.com website. In its reporting on the criticism, BuzzFeed quoted one of NOLA.com’s reporters, Prescotte Stokes, as saying the victim “parades around as a transgender woman, but he is actually a man.”

There are two elements to the criticism: first, NOLA.com incorrectly identified Proud as a male in its initial reports — a mistake they admit — and second, more controversially , the derogatory comments about Proud  attributed by BuzzFeed to NOLA.com’s reporter. Nola.com told iMediaEthics that the quotes in question were fake and the reporter never said them, but BuzzFeed stands by its reporting.

1. Misidentifying the Gender of Proud

In its first reports, NOLA.com said the victim, at the time unnamed, was a male. Later, NOLA.com changed its reports to reflect that the victim identified as a transgender women.

iMediaEthics spoke with NOLA.com metro editor Tim Morris about the pronoun and gender identification issues in its reporting.

That said, Morris noted that after the initial murder report, the paper’s reporters learned from sources in the neighborhood the victim identified as a woman. But, NOLA.com couldn’t report that on its website yet because it was not confirmed on the record by any source, he said.

A Feb. 10 NOLA.com article, has since been updated to correct the references to the victim. A note was appended to the bottom of the article rading:

Morris told iMediaEthics that the paper follows the AP style guide for reporting on transgender issues, which advises journalists to identify transgender people the way they want to be.

He added, in a later e-mail: “The real-time record shows that we corrected the story as soon as we were able to confirm that the victim was a transgendered woman and that we consistently reached out to authorities and members of the community to gain more information to report the story as accurately as possible throughout.”

Meanwhile, BreakOUT!, an LGBTQ youth advocacy group in New Orleans, issued a statement pointing out “how important it is to affirm the value of Black transgender lives, and one another.”  BreakOut! says it “seeks to end the criminalization of lesbian, gay, bisexual, transgender, and questioning (LGBTQ) youth to build a safer and more just New Orleans.”

“We are calling on the media to respect all transgender people and their families by using the correct pronouns and names for transgender victims and use current photographs to allow our community to maintain dignity both in life and in death,” the statement reads in part.

NOLA.com’s Morris told iMediaEthics the paper tried to reach BreakOUT! during its reporting on Proud but was unsucessful. BreakOUT!’s Ja’Leah Shavers confirmed to iMediaEthics by phone that NOLA.com contacted the organiation but said BreakOUT! didn’t respond because “we were holding our comments at the time.”

“That wasn’t just to NOLA.com,” Shavers said. “That was in light of the fact we were still recovering and mourning as a community [from the death] and also that we have to make sure that we were approaching it correctly in our organization as a represntation of our community.”

2. Did Nola.com Report Show Bias? Did Reporter Say Transgender Woman was ‘Actually a Man’ who ‘Parades Around?’

BuzzFeed reported that Nola.com reporter Prescotte Stokes, who covered Proud’s murder, said in an interview with BuzzFeed that he labeled Proud male because “he is actually a man.”

“They called her a girl but said he was a man,” Stokes is quoted as saying. “I assume he parades around as a transgender woman, but he is actually a man. Based on what the people who knew him said, he was transgender.”

However, Nola.com’s Morris, who responded to iMediaEthics’ inquiry to Stokes about the comments, said that the BuzzFeed quote was false. “Our reporter says the quotes attributed to him in the story were not true,” Morris said.

Dominic Holden, the BuzzFeed reporter, stood by his reporting when asked for a response to Stokes’ claims the quote was fabricated.

“I didn’t record the interview, but I wrote down the vast majority of our conversation,” Holden told iMediaEthics by e-amil. “Stokes absolutely said that statement and he is quoted correctly. I was on the phone writing down what he said; NOLA.com editors were not.”

Holden said “His full quote is:

‘The way they described him, they called her a girl but said he was a man—telling me it was a guy who basically went around as a woman. A transgender guy. I guess… he is a man. I assume he parades around as a transgender woman, but he is actually a man.’

“I’ve been a reporter for nearly 10 years and have a track record of consistently quoting my sources correctly. ”

iMediaEthics asked Morris if Nola.com still stood by Stokes’ claim of being misquoted in light of Holden’s denial he misquoted Stokes. In a follow-up email, Morris wrote:

“Our reporter says he was misquoted and I have no reason to believe otherwise. That is because the answer to the question of why  ‘he chose to report’ the story as he did is simple: The initial police report identified the victim as a male. Police did not change that for more than 36 hours and, in fact, reaffirmed it when we made inquiries.”

Neither party recorded the conversation.

What do Ethics Guidelines say?

In a news report about the coverage of Proud’s death, Media Matters noted that journalism guidelines from the AP, NYTimes and advocacy organizations GLAAD and the National Lesbian & Gay Journalists Association call for media outlets to use whatever pronoun a person wants.

The AP guidelines, which the National Lesbian & Gay Journalists Association recommend journalists follow, state for transgender reporting, “Use the pronoun preferred by the individuals who have acquired the physical characteristics of the opposite sex or present themselves in a way that does not correspond with their sex at birth. If that preference is not expressed, use the pronoun consistent with the way the individuals live publicly.”

The New York Times’s policy says, “Cite a person’s transgender status only when it is pertinent and its pertinence is clear to the reader. Unless a former name is newsworthy or pertinent, use the name and pronouns (he, his, she, her, hers) preferred by the transgender person. If no preference is known, use the pronouns consistent with the way the subject lives publicly.”