Did Daily Mail Rip Off SFWeekly's Cover Story? No Link?!

Did Daily Mail Rip Off SFWeekly’s Cover Story? No Link?! 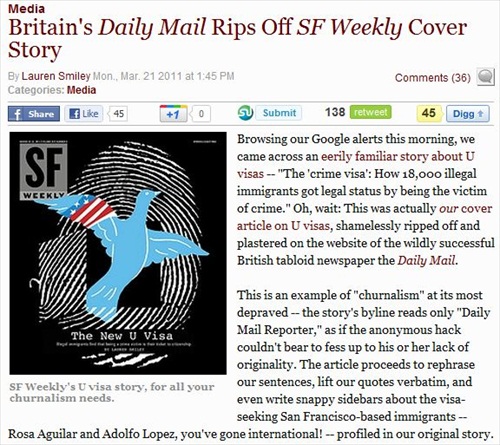 SF Weekly called out the UK Daily Mail for “churnalism” this week.  According to SF Weekly, the Daily Mail “shamelessly ripped off and plastered” SF Weekly’s March 16 cover story  – and didn’t even provide a link back to SF Weekly.

The SF Weekly story reports on U visas, which allow undocumented immigrants the ability to apply for visas if they’ve been the victim of a crime.  The Mail story uses statistics and information reported in the SF Weekly story but doesn’t link back to SF Weekly, giving the appearance that the Mail originally reported the story.  The Mail does throw in an attribution to SF Weekly, but not until the 18th paragraph, SF Weekly noted.

“C’mon, guys: All we’re asking for is some link love and heavy attribution high up in the story. Then go ahead and take what you want,” SF Weekly lamented.

Daily Mail’s March 20 story is attributed to “Daily Mail Reporter,” as was its January story on the use of electronic devices on airplanes.  That story was also accused of lifting from another media outlet — the New York Times — and the Mail corrected its story online to attribute information and quotes to the NYT.

“I think a lot of people are trying to figure out what responsible attribution looks like online,” Poynter’s Roy Peter Clark, commented to SFWeekly. “Linking is one of the simplest and oldest strategies. … I think the reason you might not link is you don’t want to call attention to how close your version is to the one you’re linking to. It may be a sign that someone knows that they’re pirating the work.”

As SFWeekly noted, Poynter’s Jim Romenesko highlighted the Mail’s lifting of the New York Times’ work in January. SFWeekly also mentioned Tabloid Watch’s spotting a similar lifting by the Mail of a 2010 Los Angleles Times article in January. In that case, the Mail directly “lifted” about seven paragraphs from the Los Angeles Times‘ blogpost about Dick Van Dyke’s guest appearance in a theatre show.

MediaBistro’s Fishbowl LA blog commented, “How tough is it to link? That’s really all it takes, along with a mention.”

iMediaEthics has written to the Daily Mail for comment and will update with any response.  We have also written to SF Weekly’s Lauren Smiley.

Did Daily Mail Rip Off SFWeekly’s Cover Story? No Link?!