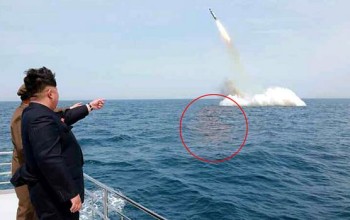 The UK Telegraph flagged a questionable shadow in this Korean Central News Agency image of Kim Jong Un looking at a purported missile launch from a submarine.

North Korea may have Photoshopped a picture purporting to show its launching of a missile from a submarine, Reuters reported.

Earlier this month, the photo was released with a claim that North Korea “successfully conducted an underwater test-fire of a submarine-launched ballistic missile,” according to Reuters.

The photo in question was released by Korean Central News Agency, North Korea’s state-run news agency. The Telegraph is one of the news outlets that published the image earlier this month.

Despite the claims from North Korea, the U.S. Admiral James Winnefeld, the vice chairman of the U.S. Joint Chiefs of Staff, said the country won’t have submarine-launched ballistic missiles for “many years.”

Two German engineers from Schmucker Technlogie explained to Reuters the photos were doctored, pointing to shadows that were in the wrong place.

“The pair agreed with analysis posted by experts on the websites 38north.org and armscontrolwonk.com that the missile was likely launched from a specially designed submerged barge, and not from a submarine,” Reuters said.

First, see below the image of Kim. Circled is a weird shadow in the water. In addition, look at the smoke coming from the missile.

One of the photos of the purported missile launch (Credit: KCNA via the Telegraph)

Now, below, another image of the purported launch. Notice that there is different smoke.

Compare the smoke in this photo with the other photo and notice the differences.

“A photo on state TV showed a missile high in the sky leaving a trail of white smoke, whereas other photos from state media showed no white smoke, suggesting the two photos were of different missiles with different propulsion systems,” the two engineers said, according to the Telegraph.

See below a side-by-side comparison.

Last month there was speculation North Korea doctored a photo of Kim Jong-un climbing North Korea’s highest mountain. He was wearing dress shoes and his hair was “remarkably untoused by the summit winds and he shows no after effect of the gout that reportedly (in mischievous western media) sidelined him last  fall,” Canada’s National Post reported.

Kotaku added that Kim’s shoes “appear clean and polished and not caked with snow” and that he doesn’t have a hat on.

Gawker suggested North Korea “should focus on honing their ‘shop skills for the time being,” given the country’s history of faking photos.

Earlier this year, news outlets were duped by a fake Twitter account purporting to be the account for the DPRK News Service, which claimed it was the “Official News feed of Democratic Peoples Republic of Korea.”

Last year, a satire news story were tricked by a story claiming that Kim Jong Un fed his uncle to 120 starving dogs.

In 2013, the Agence France Presse retracted a photo from North Korean news agency KCNA that Photoshopped a training drill to make it look like North Korea had more hovercraft.

In 2012, KCNA issued a doctored image from Kim Jong Il’s funeral that removed a group of people.

And in 2011, the Associated Press retracted a photo from Korean Central News Agency showing men in flooded waters. The photo was doctored as the men’s pants were dry despite purportedly being in water.