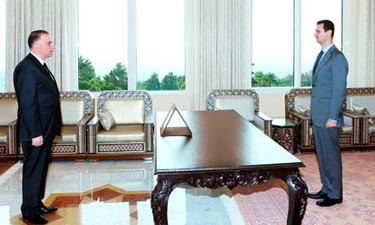 Did Syria’s state-run news agency, SANA, publish a phony photo of the “swearing in of a new governor of Hama?”

The Guardian cited its “imaging expert” David McCoy, who indicated the photo may be two photos “merged” together.  As evidence, McCoy noted the floor pictured “is distorted,” and the “right hand side of the picture has been stretched downwards into place to line up with the left side (which is not distorted).”

McCoy also noted that the “two men are not looking directly at one another.” The Washington Post noted that its Web photo editors, Dan Murano and Troy Witcher, agree that the photo has been altered.

Murano reportedly commented that the photo has “undergone some serious Photoshop.”  Witcher highlighted the “men’s hair” has been an indicator of Photoshop.  For example, Witcher noted “there aren’t any strands of al-Assard’s hair out of place,” indicating that there may have been copy and paste.