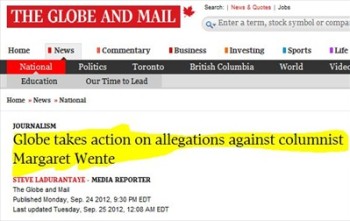 The Globe and Mail reported today that its columnist Margaret Wente is under undescribed “disciplinary action” following questions about her attribution and that the newspaper’s public editor role will be changed because of its current public editor’s handling of the situation.  Last week, the newspaper added an editor’s note to one of Wente’s 2009 columns disclosing that the “column contains views and statements by Professor Robert Paarlberg which are paraphrased and not always clearly identified.”

According to today’s report, the newspaper’s editor John Stackhouse weighed in on “similarities…highlighted by Carol Wainio in a post last week on her blog Media Culpa” between Wente’s 2009 column and a 2008 Ottawa Citizen report.  Stackhouse explained:

“The journalism in this instance did not meet the standards of The Globe and Mail, in terms of sourcing, use of quotation marks and reasonable credit for the work of others…Even in the spirit of column writing, which allows for some latitude in attribution and expression, this work was not in accordance with our code of conduct, and is unacceptable.”

Wente also commented on the incident in a Sept. 25 column in which she wrote

“I’m far from perfect. I make mistakes. But I’m not a serial plagiarist. What I often am is a target for people who don’t like what I write.”

Wente apologized for repeating “a sentence” from the Ottawa Citizen’s 2008 column, and said “The only explanation is that I put it in my notes, then put it in my column. That was extremely careless and, for that, I apologize.”

Wente said she had “no intent to deceive” in crediting information she summarized and quoted from a book. She argued that she “never pretended” that she originated the “research and observations” of the original source. She wrote:

“My aim was to be conversational and readable, and to present the gist of his work – not to pass off other people’s words or ideas as my own. Journalistic practice around quotations and attribution has become far more cautious in the past few years, and mine has, too. If I were writing that column again today, I would quote and attribute more carefully.”

“The current firestorm started with a blogger named Carol Wainio, a professor at the University of Ottawa and a self-styled media watchdog. She has been publicly complaining about my work for years. Her website, Media Culpa, is an obsessive list of accusations involving alleged plagiarism, factual errors, attribution lapses and much else. She has more than once accused me of stealing the work of other writers with whom I happen to share an opinion.

“Globe editors have spent countless hours reviewing every complaint from her, and have been quick to correct the record when warranted. The Globe has also published a letter from her that was critical of my work. Her latest allegations, over a column that is three years old, were retweeted by a number of people who didn’t bother to think twice – or ask for a response – before helping her to smear my reputation.”

In a follow-up post, Wainio wrote she was “saddened” by those comments from Wente and listed a series of “previous Margaret Wente corrections.”

The Globe and Mail noted that its public editor’s Sept. 21 “statement” on the claims against Wente “didn’t answer many of the questions raised in the blog or address any disciplinary action taken by the paper.”  The public editor, Sylvia Stead, reported then that the Globe and Mail added an editor’s note to the 2009 article by Wente after an “anonymous blogger” accused the column of plagiarism.  According to Stead’s report on her review of the column in question, July 17, 2009’s “Enviro-romanticism is hurting Africa,” “there appears to be some truth to the accusations but not on every charge.” However, Stead didn’t explain fully what was truthful and what was not.

As Stead explained, the blogger claimed Wente plagiarized from “seven different sources,” which Stead called “highly unlikely.” Stead reported that Wente responded that her column’s “intention was to synthesize Mr. Paarlberg’s argument for readers and, of course, give him credit for them. I made it clear that the thesis was his but in hindsight, I’m sorry I wasn’t clearer that some paraphrasing came from his work.”

Various sites including the Toronto Standard and Open File, and the Globe and Mail’s later report announcing Wente’s “disciplinary action,” pointed to the Media Culpa blog as the source of the claims.  Open File wrote:  “University of Ottawa professor Carol Wainio, who works in the school’s Department of Visual Arts, has spent a good while documenting the many perceived falsehoods and misrepresentations of Globe and Mail columnist Margaret Wente on her blog Media Culpa,” noting in an update that Stead referred to Wainio as an anonymous blogger.

Further, Wainio blogged Sept. 21 about Stead’s column.  Specifically concerning being identified as “anonymous,” Wainio noted she had been named by other reports, that “Stead was aware of who I was…because all, or almost all, of the issues identified here over the past year and more were sent to The Globe under my name.”

iMediaEthics wrote to Stead over the weekend asking for more information about this.  We asked if there were any complaints against the newspaper at the Ontario Press Council since her column referenced the newspaper’s membership. She wrote that she had “no knowledge of any complaint,” and that ” I should note as well that the blogger didn’t say she copied or plagiarized. I amended my column to make it clear that she noted similar phrasing and suggested reproduced.”

An “editor’s note” appending to Stead’s blog reads: “The blogger did not charge that the work of others was copied. Imprecise language in an earlier version of this column has been changed.”

In a follow-up email today to Stead, iMediaEthics asked why Wainio was identified as anonymous, when she begins reporting to the publisher, if any other changes  were being made to Stead’s role, and if editorial made any changes to Stead’s Sept. 21 post on the accusations. Stead explained that she described Wainio as anonymous “because she writes anonymously and I respect her right to do so.”  According to Stead, “I began reporting to the publisher yesterday.  We have not discussed any other changes yet.”  Concerning her column, she wrote:

“It was my column and my choice, but I have blogged just now saying I regret not being more forthright in noting that the work was unacceptable. I didn’t have all the information at hand. I reacted to the calls for an answer and should have taken an extra day or two.”

In that follow-up post, published today, Stead reminded the newspaper’s staff on its “code of conduct” concerning attribution and added that she “erred in not being more forthright in saying that” the column in question “was unacceptable and failed to meet Globe and Mail standards.”  She wrote:

“In my haste to respond, my earlier blog post was not well considered. I didn’t have all the information I required to make a proper assessment last week and should have taken more time and probed more.”

Stead also commented that she “should have referred to the blogger’s complaints, not  the anonymous blogger.”

According to the Globe and Mail’s Sept. 25 report, the Globe  and Mail’s editor Stackhouse said of the public editor’s role

“We’ve had a sense of unease since the position’s creation about the potential conflicts in a public editor being part of the newsroom and reporting to the editor…And it was apparent in this situation why – we need to separate her from the newsroom to give her more autonomy.”

As iMediaEthics wrote when Stead was appointed earlier this year, she was the Globe and Mail’s associate editor prior to becoming the newspaper’s first public editor and her position was set up to report to the newspaper’s editor.

Wainio, who revealed the incident in question, blogged a few times recently about the case.  On Sept. 24, she wrote that she “will respectively decline” responding to “interview requests.” She added “it was also not my intent to embarrass anyone,” writing:

“I would have preferred that the issues be dealt with consistently, and in a straightforward way, directly with the publications involved.  I hope that in future, when members of the public raise concerns, that will happen, and that a positive, respectful conversation can take place. “

iMediaEthics has written to the Ottawa Citizen, the Globe & Mail’s Stackhouse, the Ontario Press Council and Wainio for more information and will update with any response.