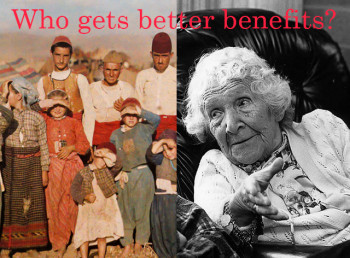 Refugees don’t get better government benefits in Canada than Canadian senior citizens, the Toronto Star‘s Kathy English reported. The false claim that they did has been circulating for 11 years, actually originated on the Star‘s website in 2004 and was repeated just this month, though.

“The myth that they do is rooted in a mistake in a Toronto Star letter to the editor published in 2004,” English wrote in a column. “And although the Star’s then-ombudsman, Don Sellar, sought to set the record straight in a column headlined, “Can we dispel this urban myth?” the misinformation has continued to circulate through the Internet.”

“This has had far-reaching implications  as the Star letter to editor was used as a basis of misinformation about refugees and pensioners in the US, Australia and beyond,” English told iMediaEthics by e-mail. “I was quite surprised when I began researching this how far and wide the ‘urban myth’ had spread.”

That letter to the editor from 2004 was in response to an unclear Star report about refugees, Sellar’s column explained. An article by immigration/diversity reporter Nicholas Keung cited then-current figures about allowances given to refugees in Canada. But, the article wasn’t clear and so some misread it as saying refugees were getting close to $2,500 a month when they were receiving a $580 monthly stipend as well as a $1,890 one-time allowance to get started. Neither that 2004 article or letter to the editor are published online.

A reader complained to Keung that refugees were getting more than $2,000, and sent a mass e-mail citing the incorrect information. Someone — it’s not clear if it’s the same person who e-mailed Keung — submitted a letter to the editor with the incorrect information that made it to print because there was no fact checking of the letter. English told iMediaEthics that Keung doesn’t recall if the person who submitted the letter to the editor is the same person who e-mailed him eleven years ago.

Then the claim was published Dec. 2, 2015 in a letter to the editor, “Let’s help ourselves first.” That letter claims:

“Canadian seniors who worked and paid taxes all their lives are worth only $550 a month but the soon-to-be-voting refugees will get $2,500 a month plus benefits. Sounds fair – or is it?”

The Star doesn’t normally fact check letters to the editor, English said, but she argued that in controversial cases citing numbers, perhaps the Star should have. However, she noted it took her “more than 2 days” to fact check the claims.

English’s fact check found that “government-assisted refugees” in Ontario receive “less than $800 monthly” for a maximum of a year along with a one-time payment “estimated to be about $2,500 for a family of four and $950 for an individual” to get started.

Senior citizens, however,  get “$569.95 a month in Old Age Security upon reaching age 65, for life.” Also, some may get a Guaranteed Income Supplement or money from the Canada Pension Plan, if applicable, she wrote:

“Lower income pensioners are also eligible for the Guaranteed Income Supplement (an additional maximum $772 a month, reduced depending on other income.) None of this takes into account what is paid by the Canada Pension Plan to those who have contributed through their earnings years.”

In addition to English’s column highlighting the false claims, English told iMediaEthics that the Star will be adding a note to the 2015 letter to the editor.