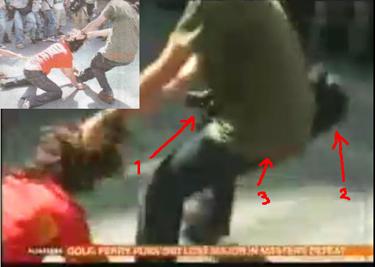 When the award winning news photo (see image, upper left) and a screen capture from the original video are compared, one quickly sees that Photoshop was used to remove the video camera equipment behind the man in green. See red arrows from the analysis found on Prachatai's Web site. They also provide information about the fake caption that originally accompanied the photo's publication on the front page of the Thai newspaper, Thai Rath. Other details include information about the Thai politics involved that would motivate such photo fakery.

Prachatai reports, “A former PAD [People Alliance for Democracy] guard grabbing the hair of a red-shirt woman and dragging her along the road during the military crackdown in April has won the Best Photo of the Year Award from the Mass Media Photographers Association of Thailand (MPA).”

On June 14, MPA announced that “35 prizes of about 700,000 baht”, Thai currency (about $30,000), was awarded to winners chosen from among a total of 600 photos and 46 television news videos contest submissions. According to Prachatai, Bloggers quickly discovered that the big winner–“Thai Rath’s crime reporter” Prasith Niwesthong’s image that won “a prize of 100,000 baht”–turned out to be a doctored photo with a fake caption.

A simple visual comparison between the contest winning image (see inset, upper left) and a video still (main image) from the same scene, clearly shows Photoshop was used to remove the man in the green shirt’s video camera. Prachatai  reports that bloggers did the analysis. See red arrows above.

The now debunked award winning news image, titled, ‘Intolerable’, was featured April 14 on the front page of Thai newspaper,  Thai Rath . Local politics and propaganda were at play and are detailed in Prachatai’s report that includes YouTube videos and the image analysis shown above.

The “About Us” section states: “Prachatai (www.prachatai.com or www.prachathai.com ) is an independent, non-profit, daily web newspaper established in June 2004 to provide reliable and relevant news and information to the Thai public during an era of serious curbs on the freedom and independence of Thai news media.”

A second Prachatai post writes more about the Thai politics involved that would motivate such photo fakery, and provides further questions and explanations about the fake caption that originally accompanied the photo’s publication on the front page of the Thai newspaper.