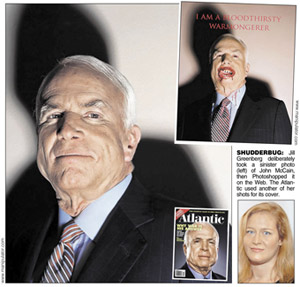 Jill Greenberg "deliberately took a sinister" photos of John McCain in The Atlantic Monthly cover photo shoot. She bragged that unflattering lighting was unnoticed by McCain or handlers. Greenberg photoshopped one of the images, for her own use, titling it, "I am a bloodthirsty warmonger."

“Controversial celebrity photographer Jill Greenberg, a self-professed ‘hard-core Dem,’ deliberately took a series of unflattering shots of Republican nominee John Mccain for the current cover of The Atlantic – and then bragged about it on a blog…” ‘ Some of my artwork has been pretty anti-Bush, so maybe it was somewhat irresponsible for [The Atlantic] to hire me.’
[Atantic Monthly] “Editor Bennet said, ‘ We don’t vet our photographers by their politics.”In a statement yesterday, Greenberg added, ‘ The pictures speak for themselves. I took the opportunity to create an image which shows my feelings about the Republican administration and possible continuation of the policies of the Bush/Cheney White House.’ ”