Trump's Mexican comments get him canned by NBC

Trump’s Mexican Comments get him Canned by NBC 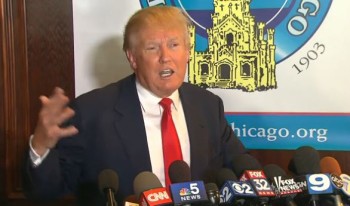 Donald Trump responded to NBC's ended its relationship with him. (Credit: NBC, screenshot)

As iMediaEthics has reported, Trump said during his announcement of candidacy for the 2016 presidential election that Mexican immigrants to the U.S. “have lots of problems…they’re bringing drugs. They’re bringing crime. They’re rapists. And some, I assume, are good people.”

“At NBC, respect and dignity for all people are cornerstones of our values. Due to the recent derogatory statements by Donald Trump regarding immigrants, NBCUniversal is ending its business relationship with Mr. Trump.”

So what does that mean exactly?

“The network will no longer air the annual Miss USA and Miss Universe pageants that were part of a joint venture with Trump,” according to NBC News. It will keep airing his reality show Celebrity Apprentice, but he won’t be on it.

Trump admitted that his “view on immigration is much different than the people at NBC,” but suggested he was behind the break with the network.

After NBC’s announcement, Trump said that the network “didn’t want me to run” for president because of his show Celebrity Apprentice. “As long as I’m running for president, they were not happy with it. They wanted me to do the Apprentice. And now with my statements on immigration, which happen to be correct, they are gonna take a different stance and that’s OK.”

He said “whatever they want to do is OK with me. I’ve had a lot of great relationship with NBC. I think as far as ending the relationship, I have to do that because my view on immigration is much different than the people at NBC.”

Trump’s Mexican Comments get him Canned by NBC