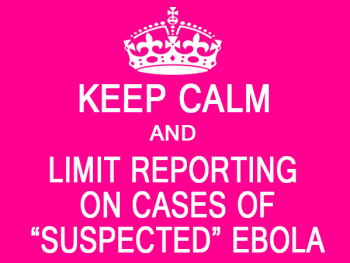 The Associated Press doesn’t want readers to freak out because of too many reports about possible Ebola infections.

Under a new guidance, released Oct. 17 on the AP’s blog, the AP said it typically isn’t publishing reports on suspected cases of Ebola. “Most of these suspected cases turn out to be negative,” the AP wrote. “Our bureaus monitor them, but we have not been moving stories or imagery simply because a doctor suspects Ebola and routine precautions are taken while the patient is tested.”

Instead, AP only will report on suspected infections if it results in “serious disruption or reaction.”

What would qualify as “serious disruption or reaction?”

“Are buildings being closed and substantial numbers of people being evacuated or isolated? Is a plane being diverted? Is the suspected case closely related to another, confirmed Ebola case?”

Even then, the AP warned against sensationalizing the reports. “When we do report a suspected case, we will seek to keep our stories brief and in perspective,” the AP’s advisory reads.

Poynter noted that in early October, the Associated Press released “some guidance on Ebola and enterovirus coverage.”

The Oct. 3 guidance called for “caution” in reporting on suspected cases of Ebola. The AP wrote then:

“Often the fact of an unconfirmed case isn’t worth a story at all. On several occasions already, in the U.S. and abroad, we have decided not to report suspected cases. We’ve just stayed in touch with authorities to monitor the situation.”

At the time, the AP noted that only 15 people had been tested for Ebola and just one actually had it.

The AP also issued guidance on reporting on enterovirus, noting that “the germ is not new” and pointing to a Q & A report with information about enterovirus 68.

iMediaEthics has written to the Associated Press to ask what prompted the guidance.