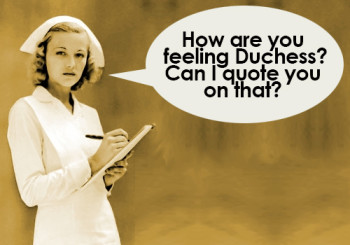 Mel Greig, one of the two Australian radio hosts who prank-called King Edwards VII hospital in 2012 to try to learn information about Kate Middleton’s new baby or hospital stay, has spoken out this week with advice for other journalists.

Days before today’s announcement of the royal baby’s birth, a girl, Greig published an open-letter in Australia’s Daily  Telegraph to not “repeat our stupidity from 2012.”

Because of Greig’s and Michael Christian’s “mistake,” she recommended news outlets play it safe, report on the birth and offer congratulations. “BE SENSIBLE,” Greig wrote. “Respect their privacy, stay away from the hospital and think of others when working out what angles to pursue.”

Specifically, Greig told journalists not to pose as medical staff or others to get information. “For anyone that is actually considering trying to repeat our stupidity from 2012, DON’T,” she wrote. “If you are a journalist planning on dressing up in scrubs to walk the corridors, DON’T.”

Greig said her letter was in response to journalists asking her questions about the incident and the royal family.

Greig and co-host Michael Christian posed as Prince Charles and Queen Elizabeth, calling the hospital while Middleton was staying there for treatment related to her then-pregnancy with Prince George.  Jacintha Saldanha, the nurse who answered the phone call and connected the pranksters with another nurse who gave information about the royal family, died by suicide three days after the call.

Greig and Christian’s radio station canceled their program, suspended prank calls, donated money and suspended the hosts temporarily. Greig went to the inquest into Saldanha’s death and apologized. She also resigned from the station the year after the call.

“I understand that you are constantly challenged to create different angles for big stories because every single outlet is covering the same story as you,” Greig wrote. “You’re always under pressure to create a unique headline and stand out. I know how you feel, I have been in that position. I sat there and agreed to prank call a hospital to create a ‘unique angle’ a harmless and stupid idea that sadly ended in tragedy, as we felt obliged to cover the pregnancy and to do it differently.”

That should be an obvious no-no, but as iMediaEthics has written, journalists have been accused in other cases of doing just that. Earlier this year, Chinese news staff from the Shenzhen Evening News were accused of sneaking into a hospital, posing as hospital staff and taking photos of a recently deceased pop star. Last year, the manager for Formula One racer Michael Schumacher said a journalist dressed as a priest to try to get into Schumacher’s hospital room.

Greig further questioned if “pressure from above” is too much, forcing journalists to be “careless and ruthless” and cross lines. She noted that when she herself was in the news because of the prank call, a journalist friend went to her parents’ house and even knocked on the doors of everyone in her neighborhood to find something to report on.

“I’ve crossed the line too. But the difference is, I’ve learnt from it and I’ll continue to work in the media so I can help others to think before they act. You don’t need to be careless to create great content.”

iMediaEthics has written to Greig and 2 Day FM’s parent company for comment.